Vanuatu has become the only country out of the five Least Developed Countries in the Pacific including Samoa, Tuvalu, Solomon Islands and Kiribati to have successfully completed its Tier 1 and 2 Projects of the Enhanced Integrated Framework Programme valued at approximately Vt1.4 billion towards the Vanuatu Tourism Infrastructure Project and agreed on the extension of the Programme beyond 2015.

The Vanuatu EIF Tier 2 Project submitted by the National Trade Development Committee, and Chaired by the Deputy Prime Minister and Minister for Commerce, Industry and Tourism, Ham Lini, was approved by the EIF Executive Board in Geneva, Switzerland on December 17. 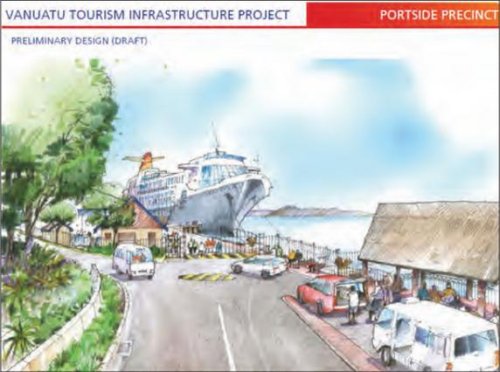 The principle purpose is to increase exports within the fast growing tourism Industry in Vanuatu through provision and distribution of services and business expansion. The project will contribute to achieve the following results; a functional, safe and attractive portside precinct in Port Vila facilitates increased tourism arrivals by sea and by air.

This project, once completed, will witness an overarching regeneration of the portside and seafront precincts in Port Vila, and is expected to generate a significant increase in tourism arrivals into Vanuatu.

Vanuatu Ambassador to the European Union, Roy Mickey Joy, explained, “The EIF assistance from Geneva will cover the costs of one key activity under the vanuatu Tourism Infrastructure Project as part of the national Tourism Master Plan namely the structural repairs of Port Vila seawall at the seafront precinct, plus the cost of some technical assistance to ensure the smooth implementation of the project. All other activities included in the VTIP will be funded by New Zealand. It is expected that a significant in-kind contribution will be provided by the Government of Vanuatu.

“The EIF is a multi-donor programme, which supports LDC’s to be more active players in the global trading system by helping them tackle supply-side constraints to trade. The WHO Aid For Trade Program for LDC’s and is being implemented through the EIF Executive Secretariat based within the WTO Headquarters in Geneve, Switzerland. Vanuatu since 2008 had benefited from the initial Integrated Framework project worth USD 1.3M and implemented jointly by both the Vanuatu Government and the UNDP resident Office based in Fiji.”

As part of the Government’s appreciation to the EIF Secretariat, the Office of the Deputy Prime Minister who is effectively the Chair person of the National Trade Development Committee has invited the Executive Director of the EIF whi is expected to attend the Official Launching of this Project to take place in Port Vila around the month of April 2015

In a related positive development for Vanuatu- Following the EIF Board and Steering Committee meetings from December 17-18 this year respectively in Geneva, there was a landmark decision that the EIF Programmes would now be extended into another phase with the details to be worked out in the first quarter of 2015. During its fifth session the EIF Steering Committee approved the extension of the EIF Programme for a new phase between 2016 and 2022, endorsing the recommendations made by the EIF Board on December 17.

The EIF partnership will prepare a proposal on the new scope and modalities of the programme for consideration by the EIF Board by March of 2015. It is anticipated that a pledging Conference will be organized mid-ear, to replenish the Trust Fund in time for the start of the new phase.

As the 157th member of the WTO joining since 24th August 2015- the EIF is of particular interests to Vanuatu as it effectively and systematically prepares Vanuatu for its future challenges through Trade Policy and through a sustained economic policy framework and policy environment.

In overseeing this EIF process from a Brussels context- the Ambassador of Vanuatu would like to congratulate the Deputy Prime Minister Chairman of NTDC – Marakon Alilee Director General of Ministry of Commerce, Industry and Tourism and EIF Focal Point as well as Andrea Giacomelli – Senior Trade Advisor in the Ministry of Trade for their leadership in the EIF Chapter. “Equal recognition must be accorded to Mr. Ben Tofor new EIF Manager and Mr. Willie Luen Pakoa of the Department of Commerce in Vanuatu for their leadership and assistance in this regard”, Ambassador Joy says.

“Special credit ought to be mentioned of Mr. Noah Patrick Kouback – Counsellor in the Vanuatu Embassy who recently completed a successful 10 month WTO Internship Training in Geneva and for his personal involvement and engagement with the EIF Team to see the Vanuatu project through”.