How the World Trade Organization will change Vanuatu

It has taken 16 years, but Vanuatu is finally a 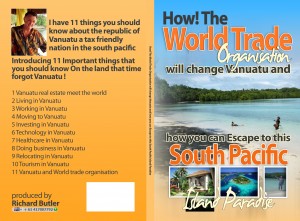 member of the WTO (World Trade
Organization). This means that Vanuatu has taken a seat at the table of what is in effect the world’s economic parliament.

They are staking a claim as a member of the world economy, giving them the ability to have a voice in decisions affecting itself and the rest of the world. This decision has not come without controversy. It can be seen as surrender to the global elites, on the other hand it is regarded as a mature policy of engagement.

So, what are the pros and cons of Vanuatu joining the World Trade Organization? And what affect does this have on their tourism economy?

To start, the World trade Organization sets the rules for global trade and provides a forum for trade negotiations. The WTO has 153 member countries. Decisions are made at Ministerial Conferences, via the secretariat in Geneva. The secretariat has limited power, their main role is to coordinate negotiations between countries, analyze world trade and give technical support to developing countries considering membership. Decisions at the WTO are made by consensus, meaning that all members must agree. Consensus based governing can be cumbersome; this is why WTO talks are so slow to come to a decision. Each county has the same formal influence regardless of its size and pays the same membership fees, except LDCs (Least Developed Countries), like Vanuatu.
There are different reasons countries decide to join with the WTO, but the biggest reason is that lowering import taxes and other obstacles should increase the overall volume of trade, raising the average wealth. Globally, the potential gains from cutting tariffs and lowering trade barriers are great. But for smaller, less developed countries like Vanuatu there is not much to gain, even if there is an improvement in overall global prosperity.
Global trade rules are supposed to stop arbitrary changes in trade policy, thus making trade fairer for smaller LDCs, who cannot retaliate through trade wars. The laws are there to help balance the scales, so that the bigger and stronger economies do not dominate global trade any more than they already do. Tragically, smaller countries have little choice than to join the WTO, since most regional trade agreements must be WTO compliant, meaning that countries must accept WTO rules even if they are not members. Since Vanuatu’s neighbors and trading partners are members of the WTO, Vanuatu is subject to the laws of international trade. They might as well have a voice, rather than having the rules being dictated to them by other nations.
However, becoming a member of the WTO means that some of Vanuatu’s policies become fixed and they are not allowed to bring in new legislation that would violate its commitments to the WTO. The biggest problem with this is it gives bigger, richer countries access to Vanuatu’s market. With tourism as the largest foreign exchange earner, accounting for roughly 50-75% of the country’s GDP, constraints on their ability to regulate their tourism industry will make it very difficult to optimize the benefits for the local people and protect the environment. The doors have been opened to foreign tourism operators and if they do not like a policy that Vanuatu is trying to enforce, they can have their own government complain to the WTO on the basis that the regulations are an unnecessary trade barrier.
Investment liberalization first came to Vanuatu in 1995, when the UN Development Program and the World Tourism Organization drew up a Tourism Development Master Plan for the government of Vanuatu. The plan was to open up the nation’s economy and resource bases to foreign investors, turning Vanuatu into a tropical paradise destination through large scale tourism. Vanuatu was to change its property ownership laws to allow for the privatization of its beaches and reefs, establish an investment promotion body and offer tourism investors tax breaks and other concessions for developments undertaken within tourism precincts. The Tourism Master Plan continues to advise Vanuatu’s tourism policies.
By joining the WTO, Vanuatu becomes legislatively locked into a commitment of opening the door for foreign investment in their economy, particularly in tourism. Vanuatu has already seen a large influx of foreign investment in their tourism industry over the past 10 years, as they slowly worked towards a deal in joining the WTO. The problem with joining the WTO is that it becomes even harder for Vanuatu to protect its developing markets from more powerful foreign investors. WTO policy prevents small developing countries like Vanuatu from actively promoting local firms, which is a key direction in the development of many newly-industrialized countries.
Because the WTO pushes for progressive liberalization, new members must submit to more rigorous terms than existing members. As a result Vanuatu is being forced to open up its tourism industry far more than the United States or Australia. This creates a blatantly unfair situation for Vanuatu. The Vanuatu government is already faced with many new and difficult administrative tasks. Joining the WTO requires the introduction of a number of new legislations, much of which is only there to satisfy the WTO requirements and does nothing to promote the development of the country and its budding tourism industry.
In Vanuatu’s Accession Package pertaining to services sector, one of the specific restrictions states that the government will not make it more difficult in the future for foreigners to come to Vanuatu and operate. The problem with this is that the tourism industry is already largely controlled by foreign investors and now it will be next to impossible to keep any new investors out. There are some investments reserved specifically for Vanuatu citizens, but they are only small to medium sized operations. This means that the largest portion of the tourism industry is controlled by foreign investment and the monies earned are not reinvested into the country. A pattern has emerged in which most of the benefits of the tourism boom are flowing to foreign investors and expatriates, with the ni-Vanuatu scrambling for the crumbs.