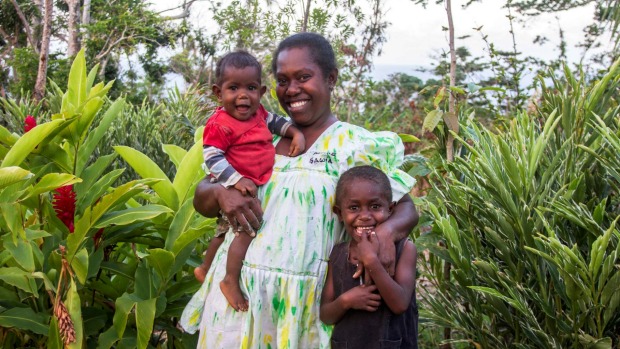 Denise Tatangis and her children in Mere Sau-wia, Nguna Island. Tatangis wants to offer homestay accommodation as another source of income.

“We’re going out to original Vanuatu,” Aru, a guide with Melanesian Tours, had told the Kiwi and Australian visitors, before taking them in a minivan around Efate Island. “This is island styyyyyle,” he’d said, flaunting a flowery blue shirt and lurching from side to side while holding on to a rail in the aisle of the bus. “You know what I’m saying?”

The 42-year-old’s audience, a mostly grey-haired bunch, whistled past gnarled whitewood trees, waving villagers, the odd cattle farm and roughshod houses, some covered in tarpaulins. To a soundtrack of their guide’s non-stop chatter, they saw piles of roofing iron on the side of the road, wind-felled coconut trees and denuded bush, rapidly sprouting and creeping its way back six months after Tropical Cyclone Pam. “Look at the coconut treeeees,” Aru had said. “The fruits are falling dooooown.” 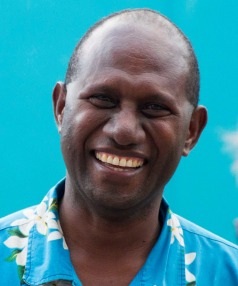 Glenda Kitney and her husband Ray, New Zealanders, bought Melanesian Tours about a decade ago, and employ 14 Ni-Vanuatu. After Cyclone Pam, their staff helped other people involved in the tourism sector with the clean up. They also volunteered with ProMedical, a non-government pre-hospital emergency service. “We had hardly any work for 12 weeks. We were very lucky we had family members who sent us money to help,” Kitney says.

Six to eight weeks after Pam, “some of the bigger hotels started laying staff off”. Cyclone Pam “ruined many a person and/or their business”, Kitney says. Not least her close friend Troy Spann, the owner of Edge Vanuatu.

“If I said that it was hard, it would be an understatement,” Spann, 47, says. Just six days prior to the cyclone, his business offering abseil tours of Efate Island’s Cascades Waterfall won Best Adventure Tour at the Vanuatu Tourism Awards. On March 27, he posted on Facebook: “Landslides and the sheer force of … water have forever altered the landscape out there.”

Aru, a former shopkeeper, is optimistic about Vanuatu’s recovery.  “Tell your people, ‘Let’s go and meet Frank.’ Everything is back to normal,” he says.

But despite his assertions of normality, and the fact that much of Port Vila’s essential infrastructure has been restored, Melanesian Tours’ business is down about 50 per cent on last year, “along with most other tourism businesses”, Kitney says.

Bryan Death, a tourism spokesman for the Vanuatu Chamber of Commerce and Industry, says visitor arrivals by air for the June quarter were down 27 per cent on the same time last year. Holiday Inn Resort and Iririki Island Resort in Port Vila, which together employed more than 450 staff, are closed until early next year. Pam’s impact is also evident on the market floor. Before the cyclone, coconuts sold for 30 to 50 Vatu (approx NZ50cents). Now, they are 100 to 200 Vatu.

According to the Australian Department of Foreign Affairs and Trade, tourism and tourism-related activities account for about 40 per cent of Vanuatu’s GDP. While Efate is usually a traveller’s first point of call, Santo, Tanna, Malakula and Pentecost Islands are also popular. Tanna was hard-hit by Pam, while Santo escaped largely unscathed. Tourism suffered just the same, however.

Many thought Pam’s trail of destruction rendered all of Vanuatu closed for business.  But visitor numbers are increasing steadily month by month, says Vanuatu Tourism Office general manager Linda Kalpoi. “While we still have a way to go to match the arrival figures of previous years, we’re definitely on the right track,” she says.

A $2.5 million marketing campaign is planned for New Zealand, Australia and New Caledonia, which Death says will “send a clear message to consumers that their holiday in Vanuatu will be the most help that they can give to aid recovery”.

On Nguna Island, off the north coast of Efate, Kathy Garoleo, a 28-year-old tourism product development officer for the Shefa Tourism Office, finds a narrow dirt track. Her destination is Mere Sau-wia, a village of a dozen extended families, who are itching to start offering homestay accommodation. They built 10 modest bungalows last year to host a group of Peace Corps trainees and now, the thatched-roofed huts present a new opportunity.

Cyclone Pam destroyed many of Mere Sau-wia’s crops. A large concrete pad is the only thing left of the community hall. The ladies of the village, or “mamas”, are holding kava nights and selling shellfish to raise enough money to rebuild it.

Taman Willie Onesmas, a spokesman for the homestay project, says while the village’s gardens are “coming back slowly, we need to find another way to earn income. We want tourists to come here”.

Denise Tatangis, a smiling mother of young children, is already in homestay mode. She has lined her small, tidy bungalow with colourful sarongs. There is a towel and a cake of soap on a mattress on the floor. In Bislama, pidgin English, Tatangis explains how to have a bucket shower in a tin-roofed outhouse. A white chicken sits in a basket of clothes in the corner, making quiet but persistent clucking sounds.

Garoleo and her counterpart, Shefa Tourism Office business development adviser Dianne Hambrook, a 59-year-old Volunteer Service Abroad volunteer, will give the villagers a series of action plans to help them to work towards tourist accreditation. But before they can start charging tourists, they’ll need a business licence, paid to the Shefa provincial government, Hambrook says. It’s likely they’ll also need to upgrade their bungalows with things like hooks for clothing, locks for doors and mosquito nets.

A half-hour drive from Port Vila, on the beachfront, The Havannah is one of Vanuatu’s higher-end accommodation options, with rooms from $500 a night.

Liz Pechan, who owns the resort with her husband, Greg, lived through Cyclone Uma in 1987, but Pam was worse, she says. Large trees were strewn like pick-up sticks, and The Havannah’s lush, tropical gardens, which Pechan had built up over several years, were destroyed.

The resort remained closed for four-and-a-half months (“We couldn’t open a half-damaged resort”), but the Pechans continued to pay their 70 Ni-Vanuatu staff, who, to management’s amazement, all turned up for work the Monday after Pam. Half a dozen had lost their own homes. Housekeepers swapped mops for bush knives and maintenance workers turned soils until Pechan was happy with the gardens again.

Guests returned to The Havannah on July 27, and just this past month, Pechan has started noticing hibiscus flowers behind some of the mamas’ ears, a common sight before the destruction of Cyclone Pam. Perhaps Frank Aru, the tour guide, was right. Maybe everything is “back to normal”. Either way, it puts a smile on her face.