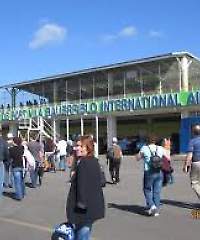 Vanuatu needs to grow tourism with its existing facility which is quite possible. There’s quite a lot of potential growth in tourist arrivals without a new international airport. This is what was stated by the Vanuatu Chamber of Commerce Tourism Councillor, Bryan Death.

The Greenfield airport plan, which included a new airport in Port Vila, Vanuatu, had been introduced by the recently-removed Prime Minister of that Pacific Island Nation, Moana Carcasses.

The airport expansion was strongly opposed by MPs and cancelled altogether last week.

The Vanuatu Chamber’s tourism councillor, Bryan Death says the new airport would not have brought more tourists to the country for another eight years.It means the existing Bauerfield Airport would have had to be renovated anyway.

“The timing wasn’t good and the agreement didn’t do much for Vanuatu as such and could have been quite embarrassing for the government down the track in terms of cost.”

The Vanuatu Tourism board explains travel and tourism for the country:

The Republic of Vanuatu is an island nation located in the South Pacific Ocean. The archipelago is located some 1,750 km east of Australia, 500 km north-east of New Caledonia, west of Fiji and south of the Solomon Islands. It was named New Hebrides during its colonial period.

Vanuatu is only 2.5 hours flying time North East of Brisbane and 3.5 hours from Sydney, Australia. It’s a little over 2 hours from Auckland, New Zealand. There are regular flights from New Zealand, Honiara, Australia, Noumea and Fiji. 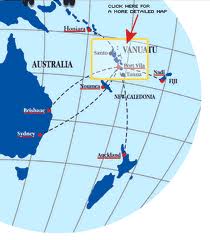 History
Many of the islands of Vanuatu have been inhabited for thousands of years, the oldest archaeological evidence found dating to 2000 BC. In 1605, the Portuguese explorer Pedro Fernández de Quirós became the first European to reach the islands, believing it to be part of Terra Australis. Europeans began settling the islands in the late 18th century, after British explorer James Cook visited the islands on his second voyage, and gave them the name New Hebrides.

In 1887, the islands began to be administered by a French-British naval commission. In 1906, the French and British agreed to an Anglo-French Condominium on the New Hebrides.

During World War II, the islands of Efate and Espiritu Santo were used as allied military bases. In the 1960s, the ni-Vanuatu people started to press for self-governance and later independence; full sovereignty was finally granted by both European nations on July 30, 1980. It joined the UN in 1981, and the Non-Aligned Movement in 1983.

Politics
The republic of Vanuatu is an independent parliamentary democracy, for which general elections are held every 4 years.
The parliament of Vanuatu is unicameral, and has 52 members. The leader of the main party in the parliament is usually elected Prime Minister, and heads the government. The head of state, the President, is chosen every five years by the parliament and the presidents of the six provincial governments.

Most of the islands are mountainous and of volcanic origin, and have a tropical or sub-tropical climate. The nation’s largest towns are the capital Port Vila, which is situated on Efate, and Luganville, on Espiritu Santo. The highest point in Vanuatu is Mount Tabwemasana, at 1879 m (6158 ft), on the island of Espiritu Santo. There are several active volcanoes in Vanuatu, including Yasur on the island of Tanna, one of the world’s most accesible volcanoes, as well as several underwater ones.

Ecology
Vanuatu is recognized as a distinct terrestrial ecoregion, known as the Vanuatu rain forests. Vanuatu is part of the Australasia ecozone, which also includes neighboring New Caledonia and the Solomon Islands, as well as Australia, New Guinea, and New Zealand. Despite its tropical forests, Vanuatu has a limited number of plant and animal species. There are no indigenous large mammals, poisonous snakes, or spiders. The 19 species of native reptiles include the rare flowerpot snake, found only on Efate. There are 11 species of bat (3 unique to Vanuatu) and 61 species of land and water birds. While the small Polynesian rat is thought to be indigenous, the large species arrived with Europeans, as did domesticated hogs, dogs, and cattle. (The wild pig and fowl appear to be indigenous.) The region is rich in sea life, with more than 4,000 species of marine mollusks. The giant East African snail arrived only in the 1970s but already has spread from the Port-Vila region to Luganville. Sourcewww.nationsencyclopedia.com

Economy
The economy is based primarily on subsistence or small-scale agriculture, which provides a living for 65% of the population. Fishing, offshore financial services, and tourism (with about 60,000 visitors in 2005), are other mainstays of the economy. Mineral deposits are negligible; the country has no known petroleum deposits. A small light industry sector caters to the local market. Tax revenues come mainly from import duties and a 12.5 percent Value Added Tax (VAT) on goods and services.

Demographics
Most of the inhabitants of Vanuatu (98.5%) are native Melanesian, or Ni-Vanuatu, with the remainder of the population made up of Europeans, Asians and other Pacific islanders. Most of the population is rural, though Port Vila and Luganville have populations in the tens of thousands. A few of the islands are Polynesian outliers. About 2,000 Ni-Vanuatu live and work on New Caledonia.