The Ministry of Agriculture, Livestock, Forestry, Fisheries, and Biochemistry (MALFFB) and the Chinese Academy of Agriculture Mechanization Sciences (CAAMS) have signed a Memorandum of Understanding opening the way for CAAMS to assist MALFFB to promote Vanuatu’s rural productive sector.

The agreement was signed at the Harbourview Chinese Restaurant in Port Vila Thursday evening by the visiting President of CAAMS, Li Shujun, and the Minister of Agriculture, Livestock, Forestry, Fisheries and Biodiversity, David Tosul. 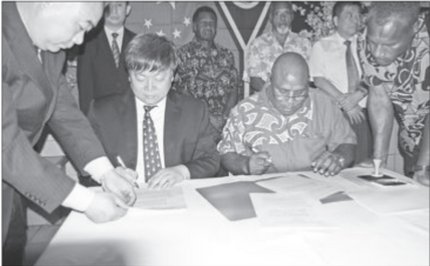 President of CAMMS, Li Shujun and Minister David Tosul at signing of the MOU at Harborview Restaurant

In signing the agreement, the MALFFB acknowledges the modern agriculture modernization or technology CAAMS can provide to enhance Vanuatu’s productive sector development in the rural areas and or intended sites yet to me formalized. And the establishment of this framework paves the way for future working relationships between the two parties in the development of Vanuatu’s rural productive sector.

The objective of the MOU is to support the partnership in the areas of agriculture, agriculture mechanization, livestock, forestry industry and renewable energy.

Speaking at the occasion, Minister for ALFFB Tosul said the signing of the MOU marked another milestone as the people of Vanuatu and the citizens of the People’s Republic of China (PRC) continued to enjoy the bilateral and diplomatic relations our two countries established since 26 March 1982.

He said the relationship between the two countries has grown so strong on many levels of development, including foreign direct investment and in areas of technical co-operations.

But no real investment has been realized that have impacted greatly on the lives of ni-Vanuatu in the primary sector development, he added.

“Approximately 70 percent of our people live off the land are rural dwellers on isolated islands in this vast ocean. Agriculture’s contribution to the country’s GDP has remained at approximately 10 to 20 percent for a very long time. The rural population of this island nation has not benefited from many past development.”

“That is why we feel that this endeavor by CAMMS is promising to offer something for the rural people of Vanuatu to be part of and one that will help raise their standards of living,” Minister Tosul said.

The President of CAAMS, Li said China as a big country was keen to assist small developing countries such as Vanuatu and this agreement was the beginning of agriculture development in this country.

According to officials of the MALFFB the delegation that is currently here from China wants to invest in agriculture, livestock, forestry and perhaps fisheries. And they are earmarking Erromango as the place they want to invest in and “have good big plans for a holistic agri/livestock/forestry system setup on that island.”

“They realize Erromango is totally undeveloped with practically no infrastructure and this is a huge challenge to start up any big invest. So the Team is doing analysis of the situation and will present its result to investors in china and they return to explore possibilities.”

The focus is on Erromango but because of its difficult terrains the Vanuatu government is suggesting they look at other islands as well.

The delegation members are from a wide range of fields: power generation, academia, agriculture, livestock, forestry and mechanization.

If things are favorable then they would like to develop specific MOA in future to start up preferred businesses in line with the current MOU signed Thursday which is to pave the way for beginning dialogue.