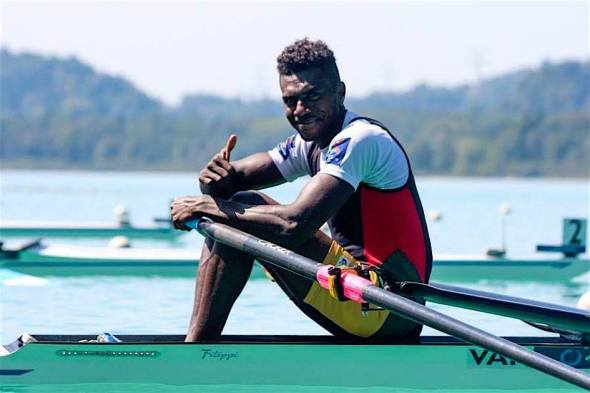 After his outstanding performance in consecutive three World Championships finally Luigi Teilemb’s next dream has come true. The 24 year old having missed out on automatic qualification 13th out of 20 at last months Asia/Oceania Champions in Korea was still awarded a place in the Brazil by the International Olympic Committee despite a small difference between him and the top seven at Korea qualifiers.

The Oceania representative for the international rowing federation, FISA, Lee Spear came across Teilemb in 2011, following this day he compromised the little difference and led him to the Olympics.

Luigi had been training hard at Hamilton, New Zealand since last year’s November and also at Tunisia with the aid of an Olympic Solidarity Scholarship scheme.

He will go up to Europe. The Australian Institute of Sport have a European training centre and they’ve kindly offered accommodation for Luigi and his coach Matt (Cameron) in Italy and they will be based there for a few weeks and go up to Poland for World Cup 3 and then off to Rio about the 23rd/24th of July.