Vanuatu province of Torba first to be declared organic

TORBA Province – often described as the ‘forgotten province’ – is now the first to be declared ‘Organic Province’ by its provincial tourism council.

The chairman of the TORBA Tourism Council, the former Head of State, Father Luc Dini, in his first public statement to mark the beginning of this new year, said that the tourism council had recently adopted a resolution of which to declare the province, ‘organic’ beginning from February,1, 2017.

He said the council has also resolved to ask the national government to endorse the declaration and make it effective for the next two years.

Fr Dini explained that with this resolution, owners of bungalows in this region will have to serve to their customers only natural, fresh and organic food and no more imported food on the table. 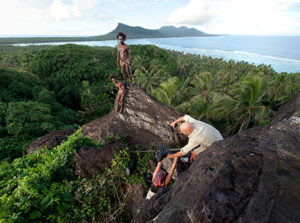 He said TORBA Province is so rich with natural resources, although it lacks most of the government essential services and mostly the air and sea services, that it could not stop the province continuing to welcoming tourists and visitors, who visited regularly its islands.

“The council has informed owners of bungalows from Gaua in Banks to Torres about the declaration,” he said.

“TORBA needs to showcase what it has to offer to tourists visiting the province – especially cultural and traditional ways of preparing local and organic food – in a ‘Melanesian way’.”

He encouraged everyone to look after tourists and visitors well, saying people in TORBA are the eyes and the feelings of visitors.

“So we need to put our hands and heads together to protect our province,” Fr Dini said.

Meanwhile he said the Vanuatu Council of Ministers (CoM), during its regional retreat in 2010 in Sola, TORBA, had decided to improve the runway of Gaua airport as a priority plan for the government in 2017. He said he hopes that the current government will continue to implement and make that plan works.

“Before that, we in the Province should do something first, instead of waiting for the government to come to us,” he said.

Fr Dini further said other projects aiming to boost tourism in the province, one is the construction of the airport at Motalava, and cruise ships to visit the province.

He stated that the suggestion was to invite the government to go and undertake a study at Ureparapara, if it is suitable to receive cruise ships in the future.

He said if this is done and proven that Ureparapara can be a port of call for cruise ships, it could become ‘a second mystery island’ in TORBA, in the far north of Vanuatu.

“Tourism is everybody’s business – those involved in tourism, agriculture, fisheries and transport. Together we can achieve more for the benefit of our people in the future of TORBA,” said Fr Dini.