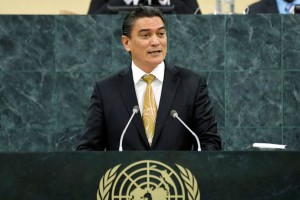 Vanuatu’s prime minister has survived the threat of a no confidence challenge, after four opposition MPs defected and joined his cabinet.

The opposition withdrew the motion against Moana Carcasses, after he won the support of four Opposition MPs.

They will replace three of his own ministers who earlier resigned to support the motion.

Mr Carcasses has told Pacific Beat the defecting MPs, who have now joined the cabinet want an end to political instability.

“Well, Vanuatu is Vanuatu,” he said.

Willie Jimmy, one of the four MPs who switched sides, says a lack of trust was behind the decision.

“The first and foremost reason why me and the other three took a decision to join the Carcasses group is because of the instability within the opposition group itself,” he said.

“We were honest, we would abide by the decision to support the motion of no confidence – unfortunately we discovered there’s a backdoor deal within the opposition block that does not include us.

“So we decided ‘if that is the deal, we might as well join the Carcasses group and keep him in power’.”

Reunification of Moderate Parties members Stephen Kalsakau and Paul Telukluk have become the ministers for climate change and internal affairs.

Tony Wright from the Union of Moderate Parties is the new youth and sport minister, and Willie Jimmy from the Vanuatu Liberal and Democratic Party is the new trade minister.

Lands minister Ralph Regenvanu says those ministries needed to be filled after three ministers resigned to support the no confidence vote.

“To become a minister is an enticement for an MP, because you get an increase in salary, and you get to employ people, and of course you get to implement your policies,” he said.

“I think it’s better than bribing people with money – offering them a ministerial portfolio because it’s actually something that needs to be filled, and we were prepared to offer them.”

The latest moves follow a string of political instability in Vanuatu since the 1990s, which has seen numerous leadership changes and MPs swapping parties.

Moana Carcasses became prime minister in 2013, after joining the Opposition in a no confidence vote to oust then PM Sato Kilman.

He says despite the history of instability, he’s confident in the support of the new ministers, who vowed to serve the nation during their swearing in-speech

“[They said] ‘prime minister, we are coming absolutely to stay and we want to work very hard’,” he said.

“And I believe them.”

Tony Wilson, editor of the Vanuatu Independent, says locals are angry about the political maneuvering.

“Their anger is across the board at all politicians on both sides,” he said.

“They’re tired of these sort of scenes, and want a government that governs and doesn’t spend its time…horse-trading.”

Mr Carcasses earlier this month called MPs together in a bid to reform the political process and improve political stability.

“What we need now in Vanuatu, urgently, is political reform, so that we can stop this sort of thing happening,” he said.

“There’s been two meetings of political parties…and we’ve started advancing an agenda that we all agree on.

“It was unfortunate the motion came in after those two meetings, but we will now resume those meetings, with a view to getting some political reform through, hopefully this year.”