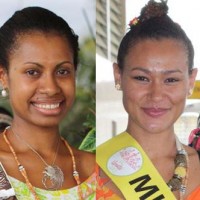 Miss PNG (L) and Miss Vanuatu (R) were the last two contestants to arrive for the Carpenters’ Miss South Pacific.

In an interview with the Solomon Star upon arrival, Miss Vanuatu said she was so excited to be here.

She is 24 years old and worked at the QBE Insurance Company in Port Vila as a credit controller. The person Ms Martinez treasured and model in life is her father (papa) citing the generous effort he made to see his children become somebody in the future. Accompanying her was her chaperon also being the vice charlady of the Miss Vanuatu committee.

Ms Martinez is studying a Bachelor of Commerce with a major in accounting at the University of the South Pacific in Port Vila.

Valerie recently represented Vanuatu in the Miss Asia Pacific World in South Korea during the month of October 2013.

By participating in Miss South Pacific, Valerie aims to show other women that being a woman is God’s gift.

The origin of a child is a mother, and she is a woman. She shows a man what sharing, caring and loving is all about and that is the essence of a woman.