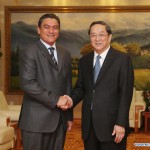 The two countries are sharing great prospects for development of their relationship, he said.

He also called on the two countries to strengthen cultural and people-to-people exchanges, increase mutual understanding between the two peoples, and jointly maintain the interests of developing countries.

Carcasses thanked China for inviting him to attend the China-Arab State Expo to be held in Yinchuan. He said Vanuatu steadily abides by the one-China policy and will learn from China’s development experience and further expand their cooperation in all areas.

The first China-Arab State Expo, a key platform for promoting trade between China and the Muslim world, will open on Sunday in Yinchuan, capital city of the Ningxia Hui Autonomous Region, which is home to more than 10 percent of China’s 20 million Muslims.

The expo originated from the China-Arab States Economic and Trade Forum, which has been held annually since 2010.