OFC: Nov. 1, 2013 – Teouma Academy is going from strength to strength as they build on the core objectives of combining elite football with education. 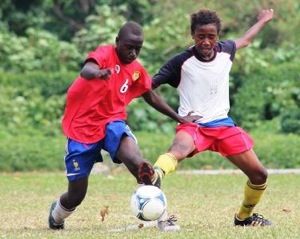 The Vanuatu Football Federation Academy is managed by Peter Takaro who says the staff are working hard to highlight the importance of both to all of the attendees.

“They must go to school first, and after their studies comes football,” Takaro says.

“So far so good, and the boys are really embracing the program and making an effort in all areas,” he continues.

“They have a lot of respect and put hard work into their school work as well as their football training over the last two months.”

Takaro says by not putting the focus on football alone, the young players are becoming well educated in both areas making them better prepared to take on future challenges.

“The programme has a good educational aspect as it teaches young footballers how they should live, get up early in the morning, pray, schooling, football training and learning how to discipline themselves – which they can use the rest of their lives.

“As manager I am really pleased with the work of the staff in general in making this Academy a success and am grateful for the assistance from VFF technical director Etienne Mermer and VFF coach/mentor Roberto Ufarte Lopez from Spain.”

Takaro attributes a lot of the Academy’s success to support from VFF and OFC as well as FIFA and the Asia Pacific Football Academy (APFA).

For more on Vanuatu football go to www.vanuafoot.vu