Vanuatu connects to the information superhighway

Prime Minister Sato Kilman has sat down with Vanuatu’s 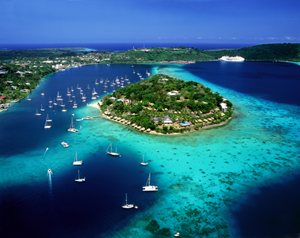 International Development
Partners to source funding for the realization of what is likely the most important infrastructure investment Vanuatu will see in the foreseeable future, the Submarine Cable.

The magnitude of the implications of the Submarine Cable’s contribution to Vanuatu’s economic and social development “cannot be underestimated”.

Because, without a global link via the Submarine Cable to the rest of the world, Vanuatu will struggle to achieve the vision of a Healthy, Wealthy and Educated Nation.

Prime Minister Kilman stressed this in the recent funding talk with potential donors at Le Lagon.

“We are here today to discuss the funding of what is possibly the most important infrastructure investment Vanuatu will see in the foreseeable future, the investment in a submarine cable connecting Vanuatu with the worldwide community,” said the Prime minister.

“The cable will be our superhighway providing a cost effective, high speed and reliable connectivity”.

“My government is finalizing a policy for the Submarine Cable and I am expecting the Council of Ministers to approve the Universal Access Policy (UAP) in the coming weeks.”

PM Kilman is determined Vanuatu will not be another country in the Pacific to remain at a significant economic and social disadvantage due to lack of connectivity through high capacity networks to the rest of the world “at reasonable prices” for its people.

He reiterated as a result of government and commercial efforts since 2005, Vanuatu now has three backbone networks, the Government Broadband Network, Digicel and TVL.

“We are planning to work collaboratively with Digicel and TVL to link these networks to support redundancy and maximize the potential of the network,” he said.

“We are also looking at whether the Government Broadband Network can support commercial networks, carrying what is expected to be an ever increasing amount of data traffic.

“No matter how we maximize these three networks, however, we will not achieve our policy goals. That can only happen if these networks are connected to an international submarine cable. We need to make this happen in the shortest possible time.

“With a submarine cable, we will provide access through wireless and microwave technologies via our backbone networks. For the more remote islands, where this is not possible, satellite up-link will be used.

While the Government is finalizing a policy for the submarine cable and the wish to see the private sector succeed remains the Prime minister pointed out the need for a “Plan B”. 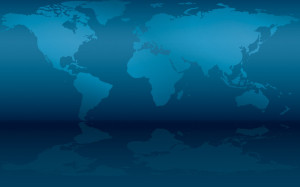 “I wish to have your support to work with the Office of the GCIO to agree the funding required for the submarine cable. We envision that over time Vanuatu has a redundant cable system in place should one link the World Wide Web fails,” PM Kilman told Vanuatu’s Development partners.

“It may be that if the Private Sector succeeds to fund the first link that the donor funding assist us to fund the diversity.
“We do not see this as being competitive in any way and do not wish to put off private sector funding but provide the back up and safety if the private sector initiative does not succeed.

“The missing link is now the realization of the submarine cable. The Private Sector and Government need your support in the funding of all or may be a part of this vital infrastructure.

“My Government is willing to take whatever steps are required to meet lenders requirements to make this happen.”
On home ground the government has been extremely active – and out front – in creating the environment for broadband development and encouraging its adoption throughout Vanuatu.

To recap, in 2005, it implemented policies to achieve reasonably priced broadband connectivity , its Priority Action Agenda (PAA), 2006-2015, states, “the improvement of telecommunications services will be largely the responsibility of the private sector with government involvement being in setting up the regulatory environment,” which covers reductions of cost of services, particularly of electricity and communications including internet.

To that end, the Government set out on the path of liberalizing the telecommunications market through separating policy and regulation from ownership together with the creation of an independent regulator with the support of AusAID. 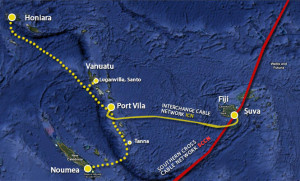 In 2008 the Government exchanged its 33.3% shares in the incumbent operator, Telecom Vanuatu Limited (TVL), for ending the monopoly three years early. This paved the way for the licensing of a second mobile operator, Digicel. In just over two years mobile penetration increased from 20% to over 70% with around coverage of around 90% of the population.

It also waived import duties on all infrastructure equipment; no charge was made for the spectrum and Licence other than an annual payment of 2.25% of net revenues to cover the costs of TRR (which also applies to all other Licensees).
Secondly in 2009 the adoption of a new telecommunications law established the independent Telecommunications and Radiocommunications Regulator (TRR).

Vanuatu fully supports the goals and framework set out by the ITU Broadband Commission for Regional Development. Based on this ITU framework a National ICT Services Policy was tailored to Vanuatu’s own unique position and stage of development.

To implement this, the Prime minister will establish a National ICT Steering Committee to oversee and coordinate the strategic actions of stakeholders.

Another major mechanism is the creation of a Universal Access Policy (UAP) to finance creation, expansion and/or maintenance of designated networks/services that would not otherwise be commercially sustainable.

This is visualised to provide subsidy funding to build infrastructure where there is market failure and to facilitate extension of voice and broadband Internet to uneconomic, un-served or underserved areas.

A key element is the use and funding of Public Access Telecenters in key locations to support the roll out of Broadband and achieving ICT for All.

The UAP Fund can receive up to 4% of net revenues of Licensees, Government money and aid from Donors. Donors can contribute to the Fund for designated projects – and not general use, it is placed in a trust account and administered by TRR (trustee).

The Fund will be administered and distributed in an open, transparent, non-discriminatory, objective and competitively neutral manner and be audited annually by an independent qualified auditor. UAP contracts will be awarded according to a Competitive Tender Procedures that has been approved by the Vanuatu Tenders Board.

In anticipation of the introduction of the UAP, in 2010, the Government conducted four pilot projects focused on providing rural schools and health centers with Broadband Internet.

The results of the four pilots will be fed into a larger project, to commence this year. Over the coming three years all schools and health centers with permanent staff will be connected with Broadband Internet Access and Telecentres will be established in many areas, supported by the UAP Fund.

The final manifestation of Government’s dedication to promoting ICT and broadband connectivity is the decision by the Council of Ministers last year, COM 109/2011, to transform the delivery of government services – “Vanuatu Integrated Government Initiative, 2011 – 2013” resulting in the now installed and operational Government Broadband Network.

“Our task is to build on what we have achieved and drive through change. This will take a concerted effort by all Ministries. For the near future I will be driving the development of the ICT through the Office of the Government Chief Information Officer (OGCIO), established under COM 109/2011,” said PM Kilman.

“OGCIO has already developed a core set of ICT skills and capable staff and we have negotiated Donor support for this important function.”

It’s GDP per capita stands at around US $ 5,500, approximately one tenth of Australia and it falls within the United Nations definition of a Small Island Development State (SIDS).

Access to the internet that is reliable, fast and reasonably priced is the key to Vanuatu’s response.

If you have any interest in investing in Vanuatu contact me on
+61 417007792 or email richardbutlersales@gmail.com
Read More about Vanuatu