Investing in people and building a business in Vanuatu 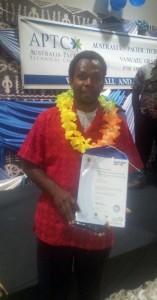 I run a business in Vanuatu called Vila Refrigeration. We are an air conditioning and refrigeration company that supplies and installs new equipment and also undertakes maintenance and repair work. Our staff requirement is for personnel who are technically savvy, preferably well trained and in possession of suitable qualifications. The simple fact is that finding personnel in Vanuatu who fill that bill has been virtually impossible. This is not just a problem for me but it is a problem across many types of enterprise.

The majority of the country’s population live in villages outside of urban areas. There are schools for children to attend but these are fairly basic and often lack resources. These shortcomings in the education system in rural areas are also present in urban schools. Secondary schooling is not free and, although school fees are not high by Australian standards, they are a burden on people who are not earning a lot of money. This is more exaggerated outside of the towns, where there is much more of a subsistence livelihood. So for the average ni-Vanuatu child it is unlikely that their education will be of a high standard or that they will be exposed to anything very technical.

Bernie Cain is Manager of Vila Refrigeration. This is an edited version of a presentation to the Vanuatu–Australia Business Forum held in Brisbane in June 2014.