Over 2000 years ago, our ancestors, navigating rough seas, created the maritime Silk Road, sea routes linking the East with the West. The Silk Road spirit embodied in friendly exchanges and mutually beneficial cooperation has become a great heritage of human civilization. Today, within the remit of the Belt and Road Initiative (BRI), we are building the 21st Century Maritime Silk Road and the proposed China-Oceania-South Pacific Blue Economic Passage by strengthening cooperation with Vanuatu and other relevant countries, which will open a new chapter for common development and progress. 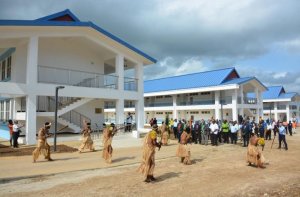 The BRI originates in China, but its benefits are shared by the world, including Vanuatu and other Pacific island countries. In recent years, China and Vanuatu have stepped up connectivity efforts and pragmatic cooperation in a range of areas, yielding tremendous outcomes.

Policy connectivity has been deepened. Chinese President Xi Jinping and Vanuatu Prime Minister Charlot Salwai had a successful meeting in Papua New Guinea last November. They agreed to jointly build China-Vanuatu Comprehensive Strategic Partnership featuring mutual respect and common development, providing political leadership for bilateral cooperation. The two sides signed an MOU on Cooperation within the Framework of BRI. Vanuatu has made a cooperation with China a priority in its endeavours to promote Vanuatu’s “National Sustainable Development Plan:2016-2030”, also known as “The People’s Plan 2030”. By forging policy and strategic alignment, China and Vanuatu have harnessed synergies for common development.

Infrastructure connectivity has been enhanced. Prime Minister Salwai and other Vanuatu leaders have publicly stated that poor infrastructure has been one of the root causes for Vanuatu’s poverty over the years. No roads, no hope. Now projects built with Chinese assistance can be seen everywhere in Vanuatu’s capital and the rest of the country. China-built infrastructures will help increase the living standards of people in remote and rural areas accounting for eighty per cent of Vanuatu’s population. The Malapoa College, the National Sports Complex in Korman Area, the roads in Tanna and Malekula, among others, have become landmarks in the region of Pacific island countries. As Foreign Minister Ralph Regenvanu said, China’s assistance manifested respect for Vanuatu’s development priorities and aspirations, meeting its development need. China’s assistance follows less stringent processes for large projects implemented, which makes it easier for small administrations like Vanuatu’s to seek direct assistance. What’s more, China and Vanuatu are discussing more ways to improve infrastructure connectivity in a bid to facilitate transportation and people-to-people exchanges between the two countries.

Trade connectivity has been enhanced. Ninety-eight per cent of Vanuatu’s exports to China are enjoying zero-tariff treatment, the total amount of which increased ten per cent last year. Vanuatu attended the First China International Import Expo (CIIE), which paved the way for more Vanuatu exports to China. China is ready to jointly host with the island countries the Third China-Pacific Island Countries Economic Development and Cooperation Forum in the second half of 2019. We have also invited Vanuatu to attend the Second CIIE, the International Horticulture Exhibition 2019 and the China International Agricultural Trade Fair to be held this year respectively in order to build upon bilateral trade and economic cooperation and boost Vanuatu’s exports to China.

Financial connectivity has been expanded. Over the years, China has provided much-needed funds to Vanuatu via grants, concessional loans and other means, taking into full consideration economic and social benefits and Vanuatu’s solvency, which have injected new impetus into Vanuatu’s development. Vanuatu has joined Asia Infrastructure Investment Bank (AIIB) and maintained good cooperation with the Export-Import Bank of China and other Chinese financial institutions. We warmly welcome Minister of Finance and Economic Management Gaetan Pikioune to attend the Second Belt and Road Forum for International Cooperation and the thematic forum of Financial Connectivity. We wish to take this opportunity to expand high-quality and high-level financial cooperation with Vanuatu.

People-to-people connectivity has been strengthened. China and Vanuatu have conducted extensive cooperation in culture, education, health care, tourism and other fields. As the happiest land in the world with abundant tourism resources, Vanuatu is attracting more and more Chinese tourists. The 2019 China-Pacific Tourism Year will bring more opportunities for tourism cooperation between our two countries. China offers around 20 government scholarships to Vanuatu and trains hundreds of professionals for the country annually. Chinese art groups give performances to Ni-Vanuatu from time to time. Three pairs of sister cities have been set up. Women’s organizations of both countries have also maintained friendly exchanges. Since 1980s, the Chinese government has sent over 220 doctors to work in Vanuatu through medical technology cooperation. These exchanges have brought the two peoples closer together.

It needs to be made clear that the Chinese side has always required Chinese companies and institutions operating here to strictly abide by Vanuatu laws and regulations, respect local customs, attach great importance to environmental protection, ensure high quality and safety of their projects and shoulder greater social responsibilities. Chinese companies have provided a number of job and training opportunities for local communities and helped Vanuatu with capacity building in the infrastructure sector, in order to lay a solid foundation for Vanuatu’s long-term development. As Minister Regenvanu pointed out, Vanuatu’s engagement with China on infrastructure projects has also contributed to updating and enforcing Vanuatu’s laws and building its own capacities for oversight. China will continuously support Vanuatu government’s effort to enhance project management and hopes that it will treat Chinese investors as equals, provide them a fair and just environment, and guarantee their legitimate rights and interests.

The BRI is guided by the principle of consultation and cooperation for shared benefits. It is open, inclusive and transparent. It does not harbor any hidden geopolitical agenda, nor is it designed to form an exclusive circle or impose discriminatory trade terms on others. China stands ready to work with Pacific island countries and their traditional development partners to further promote peace, development and cooperation for win-win outcomes.

Facts have proven that the BRI serves the common interests of China and Pacific island countries, and has created new opportunities and new channels for China-Vanuatu cooperation. Looking ahead, China will support as always Vanuatu’s national construction and sustainable development, encourage more capable enterprises to invest in Vanuatu, and promote mutually beneficial cooperation in such fields as trade, infrastructure building, transportation, communication, agriculture, fisheries, tourism, culture, education, health care and combating climate change within the BRI framework with the aim to help build more “roads of hope” and “lighthouses for development capacities” in Vanuatu, remove Vanuatu from the list of Least Developed Countries, accomplish “The People’s Plan 2030” and promote a long-term China-Vanuatu Comprehensive Strategic Partnership.