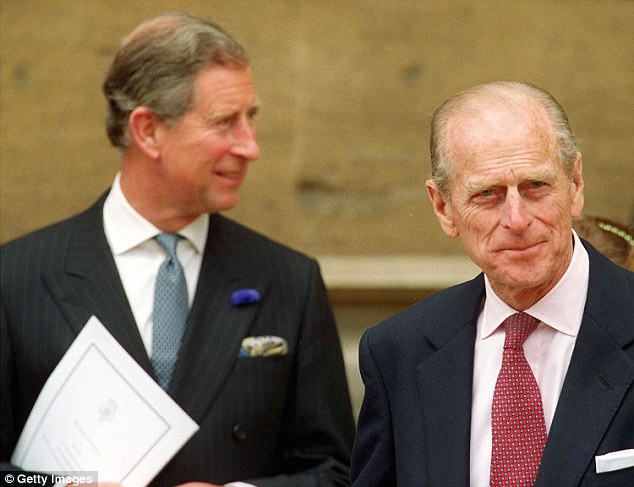 Prince Charles, pictured with his father Prince Philip, right, will travel to Vanuatu in the south Pacific where the Duke of Edinburgh is revered as a God by tribal leaders

He is used to receiving a warm welcome wherever he goes in the world.

But none quite like the one he is he set to experience when he visits the remote Pacific archipelago of Vanuatu next month.

For Prince Charles is to be welcomed with open arms and given a ‘special communication’ to take home to London for his father, Prince Philip, who is, bizarrely, worshipped there as a ‘god’. 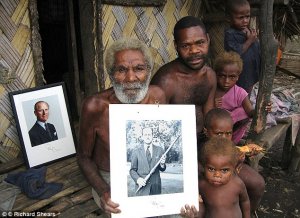 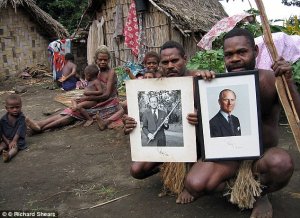 Tribal elders in Yaohnanen, a jungle village on the remote island of Tanna – part of more than 80 islands that make up Vanuatu – have told Mail Online how thrilled they are at the news that a ‘big man’ Royal will come to the region.

And they have revealed that they plan to meet soon to agree on a special message they want to give the British heir to the throne to take home to their ‘true Messiah’, his father.

It was their late leader Chief Jack Naiva, who was the inspiration for Prince Philip worship amongst the tribe when he paddled out on his war canoe to greet the Royal Yacht Britannia when the Queen and her husband visited in 1974.

When Chief Jack saw Philip standing on the deck in his white uniform, he was shaken to his core. 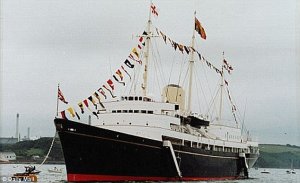 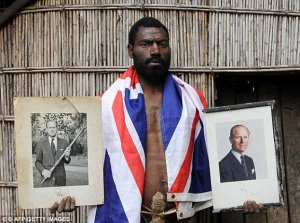 As a result of that first encounter, Prince Philip is still considered as a deity to this day 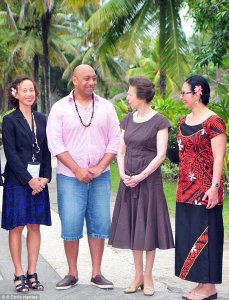 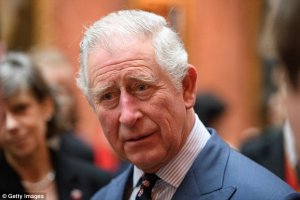 Prince Charles, pictured last month, will travel to Vanuatu on his way to Australia

‘I knew then that he was the true Messiah,’ he later revealed to the Mail.

‘To see him in the flesh like that took my breath away, even though I knew that deep inside he was more than flesh and bones.’

Chief Jack was referring to a

legend that started when Americans fighting in the Pacific war dropped boxes of food, refrigerators and even cars by parachute to the islanders.

They saw this as the fulfilling of a promise that a curious white man Jon Frum – John from America – had made, telling them that a towering volcano would open up and gifts would be showered upon them. 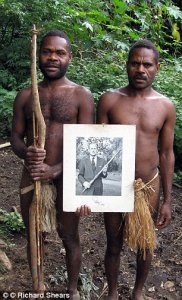 It was also said that a deity living in the volcano near the Yaohnanen village ‘became a white man who went away to Britain to marry the Queen there’.

So when Prince Philip arrived in all his regal glory, their prophecy seemed to have been fulfilled. Later the villagers sent Philip a war club and, in return, received a photo of him holding the weapon, remarkably, in the grounds of Buckingham Palace.

Chief Jack received a further two photos from the prince over the years, which still hold price of place in their jungle home.

Now Charles is due to pay a one-day visit to the archipelago’s capital, Port Vila, on April 7, as part of a visit to Australia to open the Commonwealth Games.

He plans to view first-hand the work done to repair the damage left by Cyclone Pam in 2015, one of the worst natural disasters in the history of Vanuatu, and the effects of global warming.

And while the few dozen villagers of Yaohnanen realise that Philip is now too old to travel across the world to visit them, they are thrilled that his eldest son will be so close.

‘It’s only now that I’ve learned that Prince Charles is coming to our country and I’m going to let the village know immediately,’ Noam Siaka, the university student great-great-grandson of the late village chief told Mail Online.

‘They are going to be thrilled about Prince Charles coming to Vanuatu and I can assure you that they will now call a meeting in the nakamal (a village meeting house) to decide on a special message for Prince Charles to take back to his father.

‘We believe we have a very strong link with the royal family in England because of the photos of Prince Philip that he sent out to us personally. I don’t think there is any other tribe in the world who has that kind of connection.’ 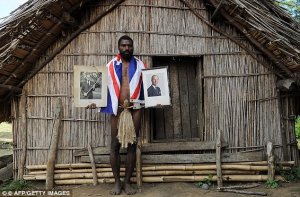 He added: ‘I think the elders would like to write something to say that they still love Prince Philip and that they hope he will never forget them.’

Another islander, Jackson George, added: ‘Those of us from Tanna who will be in Port Vila when Prince Charles arrives will make sure we give him a special welcome.

‘It would make us all very happy if Prince Philip learns through his son that we are all thinking about him and that we wish him well.’

Tanna hotel receptionist Eileen Patick added: ‘It’s the talk of the island. We all love Prince Philip, even though he has never actually come to Yaohnanen village, so everyone is very happy that his son finally arriving here.’

Before his own death, Chief Jack issued an open invitation to their deity to return. 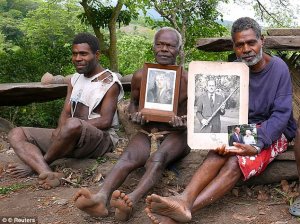 Islanders said they would build Prince Philip a nice house if he ever wanted to move to the island, and as a guest of honour, they will ‘roast pigs and bullocks’ for him

Speaking to the Daily Mail in 2006, after the newspaper revealed the amazing story of Prince Philip’s links with the island, he said: ‘We’ll build him a nice little house, he can have all the servants he wants and every day we will come to kneel at his feet because he is our true leader….. He will be guest of honour and we’ll roast pigs and bullocks for him. We’ll cook him yams and celebrate with coconut shells filled with kava. All the girls will dance for him.

‘We want him to spend the last years of his life here, because we believe that when he returns as our god, his powers will make our wrinkles disappear and we will have many wives to attend to our every need. He won’t have to hunt for pigs or anything. He can just sit in the sun and have a nice time.’

A tempting offer – but one, given that he is 95 and now retired from official duties, is unlikely to ever happen.

‘It would have been a privilege to have welcomed Prince Philip’s son to Tanna, but we understand that he’s a very busy man and can’t be everywhere,’ he said.

‘In any case, there may be other opportunities – and there are other young members of the Royal Family who might be able to pay a visit. We’ll roast a pig for them, put on special dances and leave them with memories they’ll never forget.’