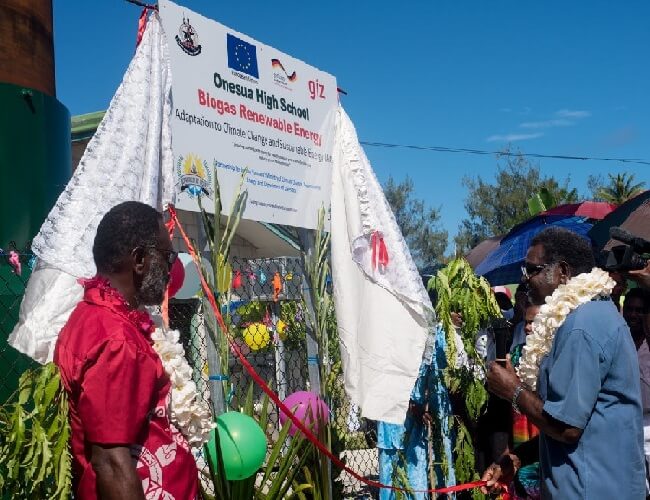 Onesua Presbyterian College (OPC) is privileged to be the first college to implement a Biogas Energy System which harnesses energy from organic waste to reliable cooking gas.

Biogas is a popular alternative around the world where commonly installed in rural location to reduce reliance on expensive gas bottles.

In Vanuatu, such Biogas Energy System have not been executed in such a scale before.

The system is constructed as part of the European Union (EU) funded Adaptation to Climate Change and Sustainable Energy (ACSE) project, which is led by the Vanuatu Department of Energy (DOE) in partnership with GIZ.

The Biogas Energy System Project is worth 26million and is funded by both the European Union and the Deutsche Gesellschaft für Internationale Zusammenarbeit (GIZ).

GIZ is a German development agency that provides services in the field of international development cooperation.

Launched on March 4 2019, OPC is proud to have access to such technology in providing cooking gas for the school kitchen and the school can reduce some of its operational costs on Liquefied Petroleum Gas (LPG).

Moreover, this not only provides cooking gas but liquid organic fertilizer that could be applied to farms and backyard gardens.

GIZ Technical Adviser Gavin Pereira and EU Representative Jenny Brown were both present during the launching. The duo donated soccer balls to the school as a token of appreciation in extending bilateral ties with the institution.

During her speech, EU Representative Mrs Brown explained the EU’s bilateral cooperation with Vanuatu, focusing on Agriculture and Trade Development.

Mrs Brown concluded by commending the Department of Environment Staff, Adapting to Climate Change and Sustainable Energy (ACSE) GIZ staff and all stakeholders on the successful launch of the Onesua Biogas System, saying “this energy saving cooking facility will not only nourish the bodies of the students, but will hopefully encourage their appetites to be creative thinkers and innovators to tackle further Climate Change challenges that will undoubtedly impact their island countries sooner or later.”

“I would like to take this opportunity to say thank you to our donor partners, in particular the EU and GIZ in funding this project in partnership with the Vanuatu Government to bring about this great achievement,” Minister Lini said.

“I am glad to see how far we’ve come to make use of our organic waste into cooking gas where mothers, parents and even children can be relieved from the normal firewood fuel of cooking if this idea is replicated across the islands of Vanuatu.

“Agriculture is a significant part of Vanuatu’s economy. Subsistence agriculture is the dominant source of livelihood for 80% of the country, whom live in rural areas, with the awakening of this new project, it will surely save time, energy and money.”

South Pacific Plantations Management Limited, a company with a large start-up farm project on Malekula, is looking carefully at how to use this technology to provide fuel for a village and farm machinery.