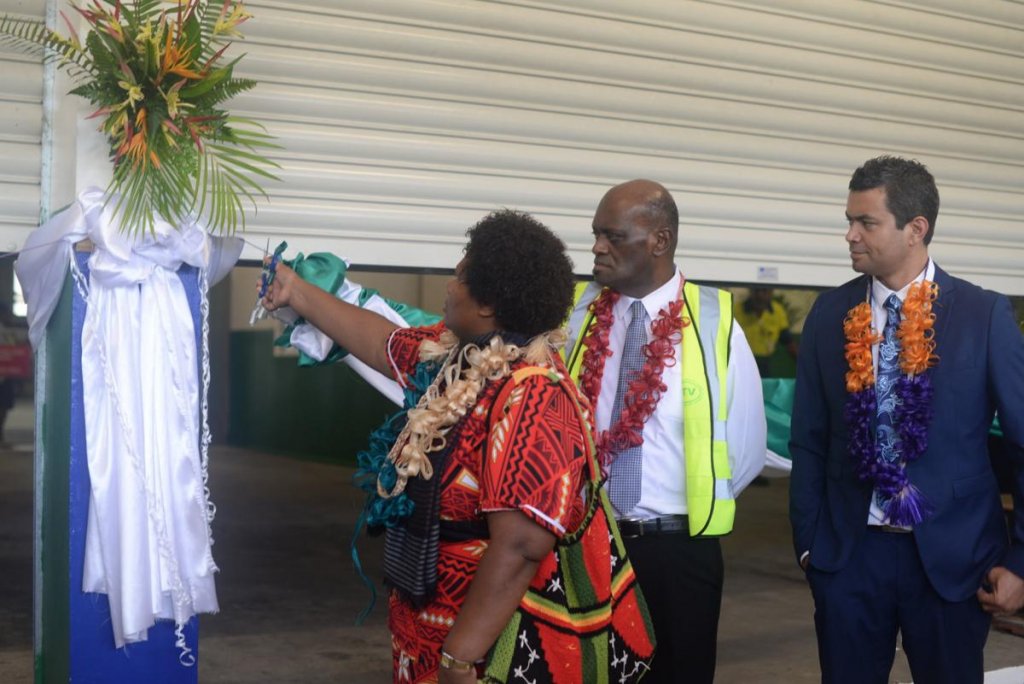 Wife of late Gwaenael Melteras given the honor to cut the ribbon to the new Air Cargo terminal as Chairman of AVL/VTS Board, Bakoa Kaltongga and AVL CEO, Jason Rakau look on.

In his official address, Mr Napat said that expansion was a result of a year of hard work by Airports Vanuatu Limited and its subsidiary company, Vanuatu Terminal Services Ltd to achieve strategic objectives of a government based on clear and precise policy direction it wishes to embark on for the betterment of the nation and its people.

“It is the result of a year of hard work to complete only one of the many components of aviation infrastructure improvements required to achieve the current government’s top priority strategic objective of upgrading our gateway airport’s infrastructure to be capable of long-haul, wide-bodied aircraft operations in the future and in compliance with international aviation standards,” he said.

Completion of the project complements other airport infrastructure projects which are currently active and in progress at Bauerfield International Airport including new airport fire-fighting facilities and equipment, replacement of navigational aids with the most modern technology avaiable, refurbishment of the current passenger terminals and the much anticipated runway rehabilitation project.

“It is for this reason, this government has set these airport infrastructure projects as its top priority,” he said.

“The events which occurred early 2016 within the aviation sector has demonstrated what effect the aviation and tourism industry has on the nation as a whole and why the aviation sector is one of the most important sector directly having an influence on the economic prosperity of this nation- we have put our heads together to upgrade and make significant improvements to our past capabilities.”

The Chief Executive Officer of AVL, Jason Rakau who is Interim GM of VTS said that the approach taken by AVL and VTS with the support of its Shareholders being MIPU, MFEM and Board of Directors to package airport upgrades to ensure achieving this important government strategic objective.

“Following the September 11, 2001 terrorist attacks on USA World Trade Center, the International Civil Aviation Organization (ICAO) of which Vanuatu is a member state, reviewed international civil aviation operating rules and introduce stringent security processes and procedures for all member States to implement in order to enhance security over international air cargo operations and gave all member states a deadline of 2008 to be compliant,” he said.

“Vanuatu Terminal Services Ltd was set up by AVL in 2005 as its subsidiary ad commercial arm to manage implementation, maintenance and compliance with these new Civil Aviation rules, well in advance of the 2008 deadline.”

Mr Rakau stated that VTS was part of three developments that have taken place since 2005.

“In 2003, VT30 million was spent by AVL to set up VTS that was up and running in 2005 and VTS did pay back the amount in five years, in 2007 VT60 million was used to extend and set up offices at the VTS and in 2018, VT48 million was spent to create space and to enable comfortable handling of cargo from now into the future,” he said.

“This is a One-Stop-Shop where all relevant cargo agencies and authorities are in one place to avoid unnecessary spending by clients going to and from town to clear documents to be able to get their cargo.”

There are approximately 34 permanent staff at VTS and 14 part-time staff that are more engaged in fire services and security services.

“I am proud to state the VTS effectively manages and controls security of all international air cargo and mail in and out of the Republic of Vanuatu and operates as a commercial entity which actively participates in the ongoing international Airports Development Program of our nation,” Rakau said.

Mr Napat concluded that the investment is without a doubt “necessary and vital to this nation and i take this opportunity to acknowledge the hard work and dedication of the AVL/VTS Board, management and staff towards achieving this important milestong for aviation development in our nation”.

The occasion also featured a minute of silence in remembrance of late Gwenael Melteras, who was General Manager of VTS since 2005 until his recent passing.

Melteras was one of the key person behind the expansion of the Air Cargo Terminal expansion and was described as the ‘best professional in terminal operations on Vanuatu’.