* Richard Butler, travelling with Deputy Mayor Yang Xiaotang of the Chinese Powerhouse first tier City of Dongguan in southern China and currently on a road show in the South Pacific including Australia, New Zealand and the Republic of Vanuatu, reports on the experience from his perspective as an ex-Trade Commissioner.

Vanuatu is strategically placed as part of the new “1 Belt 1 Road” concept and pet project of China’s resident Xi Ping known as the Maritime Silk Road emitting from the Pearl Delta Powerhouse cities of Guangdong, Dongguan, Shanshen, down past alaysia, Indonesia, and through to Papua New Guinea, the Solomon Islands, The Republic of Vanuatu, and further south to Australia and New Zealand. The Belt and Road Initiative, according to Vision and Actions, “advocates peace and cooperation, openness and inclusiveness, mutual learning and mutual benefit,” as well as “promotes practical cooperation in all fields, and works to build a community of shared interests, … featuring mutual political trust, economic integration and cultural inclusiveness.” Thus the Belt and Road Initiative is nothing less than a Chinese call on the international community to jointly work toward a “harmonious and inclusive” world. The One Belt trade concept is supported by the President of China’s pet project then a Maritime Silk Road – a trading concept to utilise sea routes servicing nations and including the South Pacific nation of the Republic of Vanuatu. 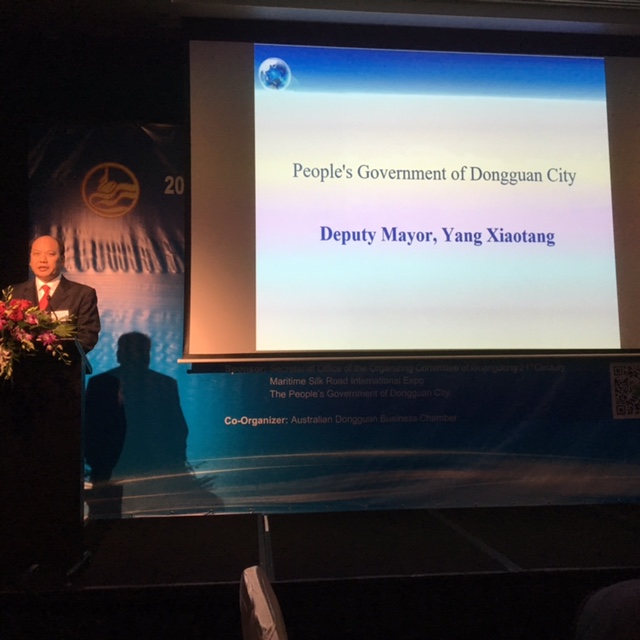 Maritime Silk Road International Expo promotion last Thursday night at the prestigious Sydney Shangri-La Hotel Ballroom, Richard Butler reports that Dongguan Deputy Mayor Yang Xiaotang knows how to deliver the message that the Maritime Silk Road Expo not only wishes to encourage business trade but also wishes to participate in a cultural exchange. The intent is to enhance the mutual benefit from reaching out via the President of China’s incentive which also benefits Guandong and Dongguan – known as the world’s factory – and now most interested in doing business in these South Pacific nations. Also present to hear this clear call were well over 200 Sydney business people, including past and present members of the Australian Parliament both state and Federal, members of the press and some of the best known business journalist in Australia.

On to PORT VILA, Vanuatu

Travelling on the following day with the President of the New South Wales chapter of the World Dongguan Entrepreneurs Federation Mr Justin Chan and a prestigious business group of both Vanuatu and Australian based investors, Richard states we we’re nothing short of buoyant after the Sydney promotion. However the Deputy Mayor of Dongguan Yang Xiaotang really excelled himself on Friday night in the Vanuatu capital township of Port Vila when he delivered his Maritime Silk Road Expo promotion speech at the Warwick Le Lagon Resort Ballroom. 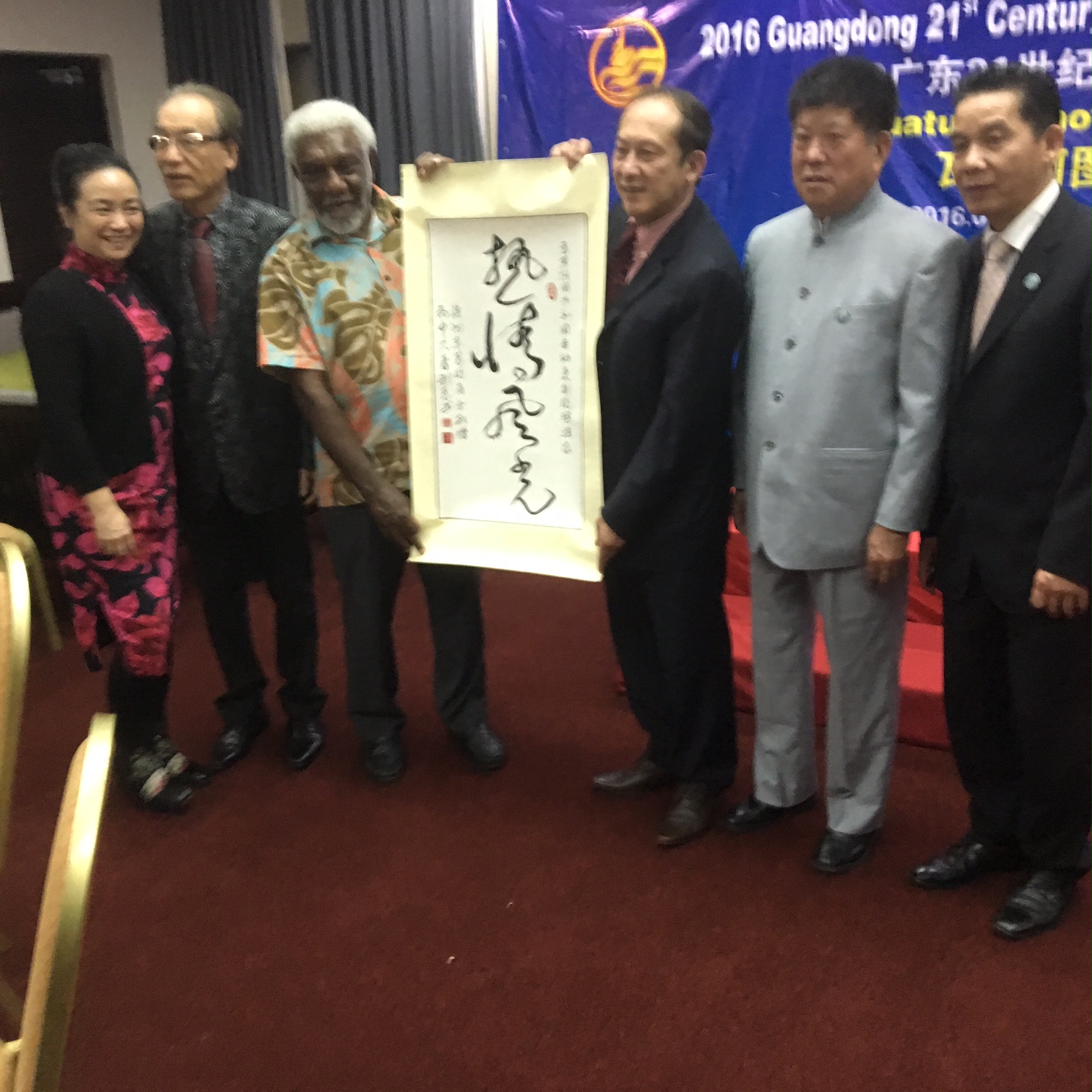 The new Chinese Ambassador to Vanuatu Mr Lui delivered an enthusiastic opening speech which included his statement that Vanuatu is “a new land of opportunity for tourism investors, especially eco-tourism opportunities.” He continued, “The mainland China tourist would simply love Vanuatu – they can come for marriage and honeymoons, they can come for the golden wedding celebrations, and what a simple and stand out beautiful place Vanuatu is!”
Ambassador Lui explained the opportunity to tap into the promoting to the Chinese. As an incentive he stated that last year 100 million Chinese travelled outbound. It is forecast that 500 million tourists will be travelling outbound from China by 2020!
The room was still trying to process these amazing figures for tourism futures when he simply said “All we need to do is have 1 million of those come here, and we can be the next standout nation like Palau for the scuba divers. It’s a natural environment Second to None.” The statement was seconded by the Deputy Mayor of Dongguan Mr Yang Xiaotang who explained that his city has a population of 8 million, has over 8,000 businesses, and contributes over 100 Billion dollars to the Chinese national output of 1,067 billion dollars per annum.
At the first Dongguan Maritime Silk Road Expo in 2014 he informed listeners that 20 years ago Dongguan had a population equivalent to approximately Vanuatu’s population today: 280,000. Back then Dongguan was a string of 8 separate villages. The growth has been absolutely incredible. Deputy Mayor Yang Xiaotang went on to say that he felt Vanuatu is the pearl of the South Pacific. He certainly had no argument on that fact from the collection of interested businessmen and tourism operators that attended the Port Vila meeting. 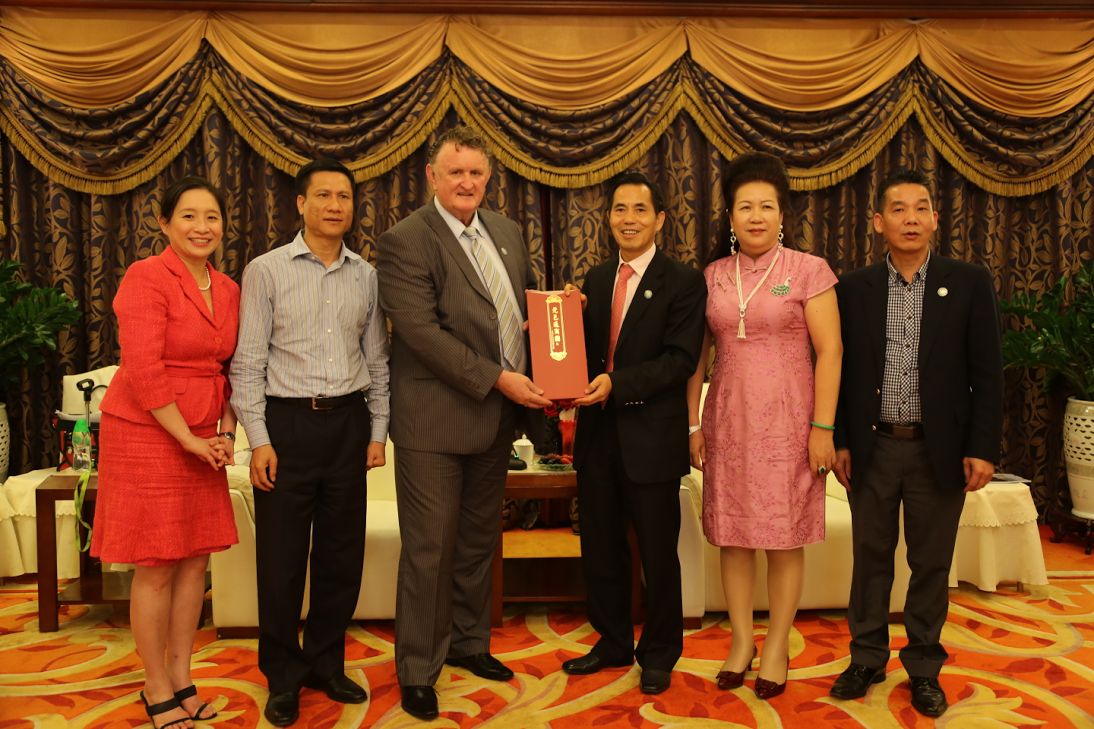 The Deputy Mayor provided the staggering figures that the Expo is now only entering its third year. Last year over 100,000 visitors attended the Dongguan Maritime Silk Road Expo with 1300 stalls and they expect this year with twice as many stalls, 2700 exhibitors in the buildings which have over 70.000 square metres of promotion space.Nations throughout Asia and further afield attend as do all the Mr Yang Xiaotang further in his presentation explained that his city of 8 million people is China’s third most prosperous city, with twenty 5-star hotels, so his statement that he felt Vanuatu is ready to enter the world of tourism opportunity and open up as a destination for Chinese tourism was greeted with rousing applause. But after he stated that he also wished to have the Vanuatu Deputy Prime Minister and the Finance Minister visit in October 2016 so he could assist them to canvas Chinese Airlines for direct flights to Vanuatu the ballroom echoed with even louder acclaim!
Vanuatu Deputy Prime Minister and Minister of Tourism, Commerce, Trade and Ni Vanuatu Business, Mr Joe Natuman, laughed and smiled as the statements were delivered. In his own speech he confirmed that he felt the ministers and Vanuatu government representatives have to follow through. He will do his very best to make sure that this does happen with regard to representation at the 2016 Guangdong Maritime Silk Road Expo in October. 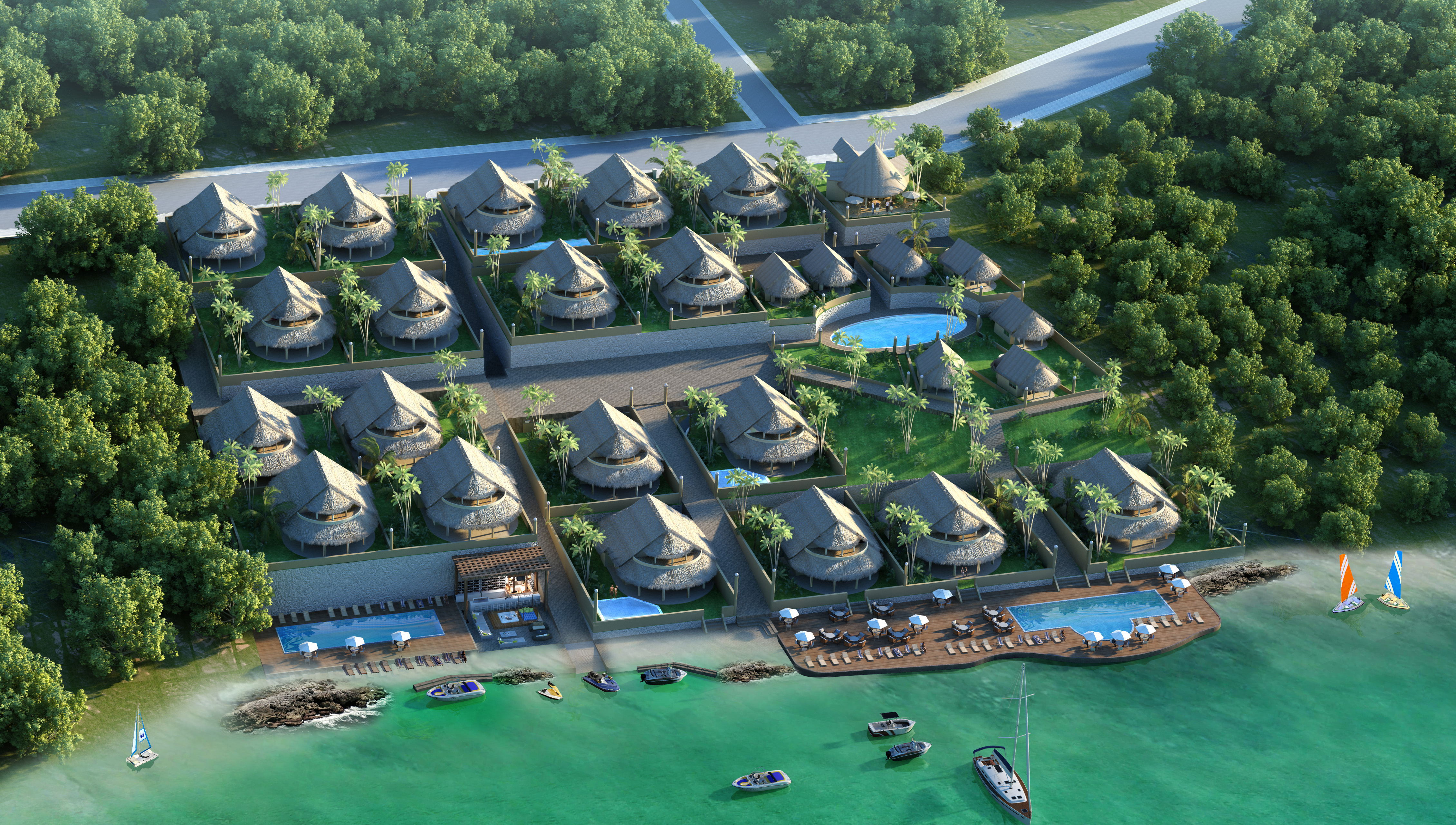 In the Deputy Prime Minster’s speech he also informed the audience that his granddaughter is learning the Chinese language at the Malapoa school in Port Vila. The school is currently celebrating it’s 50th year since establishment and is being upgraded thanks to a Chinese Grant. He Ambassador Lui for his enthusiastic speech. He outlined for the audience that Vanuatu has had a long standing relationship of trade with the Chinese, in fact the local Bislama language was born from the requirement for the Chinese and the Vanuatu people to be able to communicate when over a hundred years ago Chinese traders came to Vanuatu originally seeking to purchase sea cucumber.

It was a wonderful presentation night full of promise based around the positive requirement of all nations to be able to trade peacefully between each other. Deputy Prime Minister Natuman further confirmed that Vanuatu tourism will boom but also needs trade. Areas such as agricultural projects, organic beef, and forestry, are some of the other avenues where Vanuatu can reciprocally trade with China.

You could not come away from the Expo promotion night without feeling as if we are witnessing something that the business community and people of Vanuatu have been been waiting for: a visible fusion of elected Chinese and Vanuatu government officials with a positive message of future development. Something that will see Vanuatu achieve long term gains from international trade and benefit from tourism projects which will be spawned from individually recognised direct flights as a “must have” for trade between China and the Republic of Vanuatu to prosper.

Footnote: the third Guandong Maritime Silk Road Expo will be held in the Southern China city of Dongguan the 29th and 30th of October 2016.
To participate in a joint promotion stand please contact Richard Butler, telephone +61- 417 007 792 or richard@allaboutvanuatu.com * Richard Butler, Resort and residential property developer, entrepreneur and ex Trade Commissioner for the Republic of Vanautu (between May 2012 May 2015), reports from the islands of Vanuatu and Sydney Australia that he’s been travelling under invitation with the Sydney entourage following the Deputy Mayor Yang Xiaotang of the Chinese Powerhouse first tier City of Dongguan in southern China, currently on a road show in the South Pacific including Australia, New Zealand and the Republic of Vanuatu. This last being an emerging nation and an archipelago of 83 islands in the South Pacific situated west of well known Fiji and east of northern Australia.