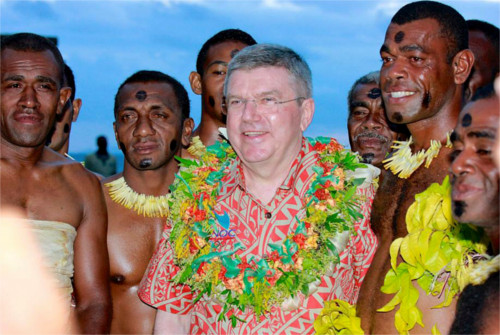 PORT VILA, Vanuatu (AP) — International Olympic Committee president Thomas Bach visited cyclone-damaged sporting facilities on Vanuatu and discussed with officials how some of the $500,000 aid money pledged by the IOC might be spent to repair the venues.

Cyclone Pam swept through Vanuatu in March, killing 16 people. The country is located about 1,750 kilometers (1,100 miles) northeast of Australia.

Bach says “what surprises me the most is the confidence and optimism level Vanuatu people have, and that is the true Olympic spirit … we hope that our contribution will give hope to the whole population.”

Bach’s trip to the South Pacific also included Australia, where he met with Australian Olympic Committee officials, and Fiji.