The international team at Rockwell Olivier Sydney recently advised ANZ on the provision of project financing for the historic Interchange Vanuatu Cable Project, write John Ridgway and Giselle Parker-Kempe.The Interchange VanuatuCable Project is a massive milestone for the people of Vanuatu and heralds the arrival of the first international submarine optical fiber cable connection for Vanuatu.Interchange Limited, the Vanuatu-based project company, will construct, own and operate a 1224km submarine optical fiber cable to connect Vanuatu with Suva, Fiji.

This cable is to connect Vanuatu to the Southern Cross Cable Network, which links Australia and New Zealand with the US.

The significance of the deal may be lost on you unless you understand how the world is connected.

Australia, for example, is connected to the rest of the world by more than 10 different sub sea cables. There are approximately 244 cable systems that are currently active or due to enter service by 2014 worldwide.

However, like many other Pacific Island countries and territories, Vanuatu currently relies on satellite links to connect its domestic network to the wider global network. Satellite links now only account for a tiny percentage of international traffic. Satellite connections are generally expensive, unreliable and not very secure.

It’s for exactly this reason that this project and deal is so significant for Vanuatu. The new cable will provide additional capacity and speed for international traffic, making it a key infrastructural improvement that will assist Vanuatu both economically and socially.

So, what does it take to lay an undersea cable and connect two countries?

Firstly, a lot of time goes into planning, designing, and commissioning t
However, the actual laying of the cable using specialized cable-laying ships only takes a few days –at least for a cable the size of the Vanuatu-Fiji cablehe cable. There are years of planning involved in obtaining marine surveys, demand forecasts, revenue projections and business case studies. There’s also a lot of time that goes into understanding the legal systems of the countries that the cable will run between; for example, acquisition of permits and landing rights, the taxing of revenues and environmental regulatory schemes.

As we touched on above, the development of a submarine cable system requires a wide array of dif 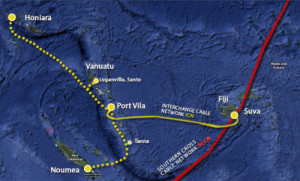 ferent skills and specialties. As the legal advisers to the lead arranger, it was our job to investigate the various risks involved for the lenders and to assist in addressing the various legal hurdles.

Our involvement in the project began with conducting the legal due diligence exercise, which included (but was not limited to) understanding the corporate structure of the project company, understanding the licences, regulatory and environmental approvals that had been obtained, and reviewing the insurances, capacity purchase agreements and supply contracts for the build. With our vast experience (and teams) in both Vanuatu and Fiji, we were able to identify the permits and approvals that were outstanding and assist in obtaining these to get the deal over the line.

Our significant banking and finance experience meant we were also involved in the documentation and negotiation of the financing of the deal, including the facility and collateral/security package. Having local knowledge enabled us to assist all involved in overcoming some of the challenges that the multi-jurisdictional nature of the cable posed to what we’d call a ‘traditional’ security package.

The highlight of this transaction was undoubtedly working with a fantastic group of people to ensure this project reached financial close, which included: the specialized finance team from ANZ in Singapore; Simon Fletcher from the project development company, Interchange Limited and external Financial Adviser to Interchange Limited, Gary Ayre;  Interchange Limited’s legal team from Ashurst (Sydney) led by partner Simon Irvine, and ,of course, our teams from our affiliate firms on the ground in Vanuatu and Fiji.

We very much look forward to celebrating this team effort when the cable lands at Mele Bay in Port Vila.

Another highlight was being able to play with Google Earth at work (due diligence on the cable route – of course).

Lastly though, and on a more serious note, perhaps one of the more enjoyable components of the transaction has been being part of an exciting project that, without a doubt, will bring significant prosperity to the people of Vanuatu and the business community there. Could there be a better reward for a lawyer than actually doing some good in the world? We doubt it.