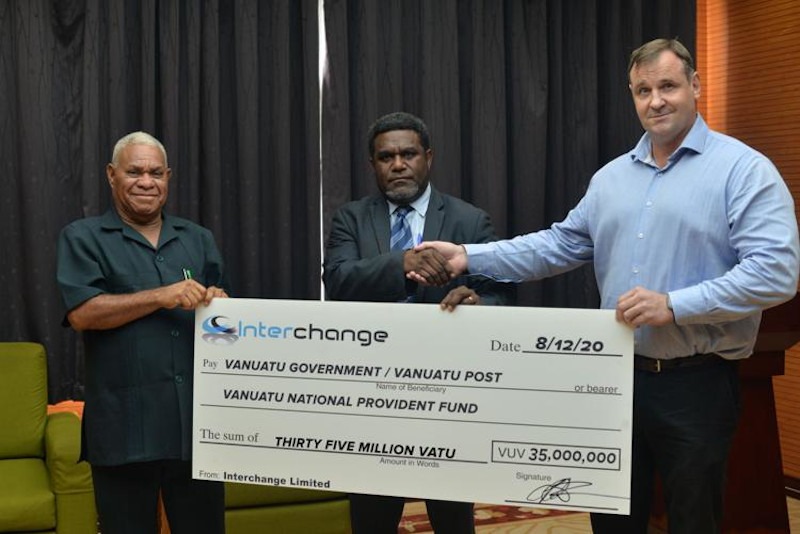 The Managing Director of Interchange Ltd, Simon Fletcher, handed a cheque to the amount of Vt35 million to the Minister of Finance, Johnny Koanapo, witnessed by the Prime Minister Bob Loughman, and Santo-Malo MP Wesley Rasu.

The handing over took place at the Prime Minister’s office yesterday morning.

In response the Finance Minister, speaking on behalf of the Vanuatu Government, the VNPF and the Vanuatu Post, thanked Interchange for the Vt35 million dividend.

Mr Koanapo said the government is pleased to note the lowering of prices, the plan of the expansion and investment of the project in the Solomon Islands which he said, is a major investment for Vanuatu. A dividend was paid to the Government of Vanuatu in January 2018. 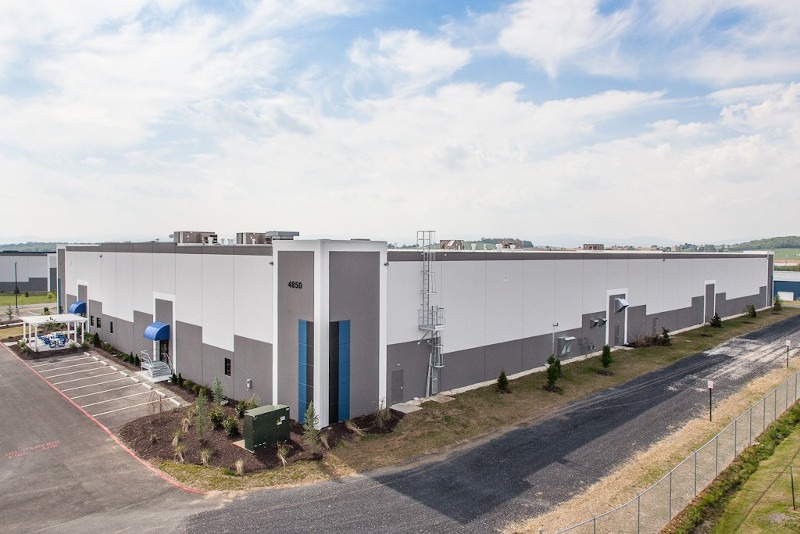 Prior to the cable launch in April 2014, retail providers were purchasing approximately 150 Mbps of capacity from international owned Satellite Providers at a price of US$ 3,000 (Vt330,000) per Mbps.

In 2020, the internationally owned retailers operating in Vanuatu are purchasing 8,000 Mbps of capacity from Interchange, a 100% owned company, for as little as $US 65 (Vt7,000) per Mbps.

For the first time in Vanuatu, the retailers have surplus capacity not being distributed to the end users, Company Managing Director, Simon Fletcher, pointed out.

Mr. Fletcher said Interchange Ltd’s board of directors approved the extension of the submarine cable system with second cable project (ICN2) in 2018, subsequently Interchange has embarked on the project, investing Vt550 million to date on marine surveys and landing station equipment.

He explained that ICN2 is a necessary expansion of the network to support the Vanuatu economy as it grows in digital dependence. The internet society’s “Cost of Shutdown Tool” estimates the cost to the Vanuatu Economy to be in excess of $US 9 million (Vt1 billion) over a one month period, he estimate time to repair a cut to the ICN 1 submarine cable.

He also explained that having a second cable protecting Vanuatu’s access to the internet provide access to new industries and new sectors to support the diversification and continued growth of the economy, ultimately resulting in lower wholesale pricing for domestic broadband services.

Mr. Fletcher went on to explain that AELANSAT has been developed as to provide affordable, high-speed connections from the Interchange Cable directly to the end user through retail partners.

“This network will reach every corner of Vanuatu and cover all our neighboring pacific countries and the estimated launch date is Q2 2021,” Mr. Simon Fletcher, assured the Government and the shareholders of the Interchange LTD.

The Solomon Islands investment is in ICN2. Mr. Fletcher also pointed out that the ICN2 project extends the submarine cable network north to Santo and to the Solomon Islands. The extension, he explained, was part of the initial business plan for Interchange, and the project commenced in 2018. Interchange board approved the investment of Vt550 million of company profits in the project and engaged with SubCom in the USA, one of the world best submarine cable operators in the world.

“We have completed Marine and Environmental Studies in Solomon Islands and Vanuatu, acquired landing sites and landing station equipment and the last stage for us now is to secure funding and lay the cable,” Mr. Fletcher assured the Vanuatu Government and the shareholders.