What was once a vision turned into reality yesterday when Air Vanuatu launched the inaugural flight for the Melbourne-Port Vila route, with the support of the Government through the Vanuatu Tourism Office (VTO).

The touchdown of the Air Vanuatu flight from Melbourne at the Bauerfield runway signified that the Government’s shared tourism aviation vision can make a difference towards Vanuatu’s economic growth.

VTO has contributed around Vt2Million for market activation activity with the flight tender as a major wholesaler in the Australian market. 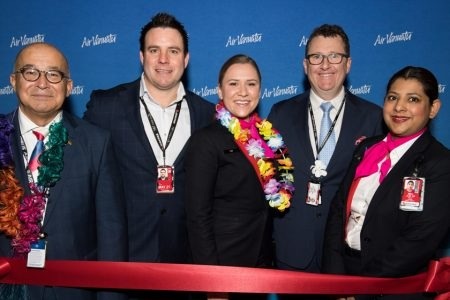 “The outline of the new branding strategy delivered that Vanuatu is a real life changing destination by continually diverging the experiences within all islands so the Tourism Office can attract markets into Vanuatu,” VTO Chief Executive Officer (CEO) Adela Aru said.

“The Melbourne Market holds 20% of the Market shares in Australia, with their communal support, we can be assured of an improvement in tourism and economic growth within our market.”

CEO Aru conveyed that 20 Industry Operators in Vanuatu have shown their support by traveling to Melbourne to celebrate the Government’s plan of the inaugural Melbourne launch.

Since the announcement of the 2030 Shared Vision for Tourism and Aviation earlier this year, the Government has taken significant steps to ensure its success.

Prime Minister Charlot Salwai remarked during his official address that “the release of the 2030 Vanuatu Tourism Market Development Plan is to provide direction and strategy for future tourism marketing and to ensure dispersal of visitation is made available throughout Vanuatu”.

“We have committed additional funds to VTO for marketing and promoting of Vanuatu, some of which has supported the successful launch of these flights today,” Prime Minister Salwai said.

“Furthermore, we have released the 2030 Sustainable Tourism Policy to ensure that we are protecting our environment and cultural heritage.

“We have taken steps to secure a new aircraft for AVL that will enable the opening of new markets and opportunities for trade and development.

“We are also pleased to see that the Bauerfield Runway Project is near completion and will be officially announced shortly.”

PM Salwai added that forward bookings for the Melbourne service are looking positive and that to celebrate the launch, a series of new airfares specials to Vanuatu have been released from New Zealand, Australia and Vanuatu.

He concluded his remarks by congratulating all who have been involved in this journey of the implementation of the 2030 Shared Vision.