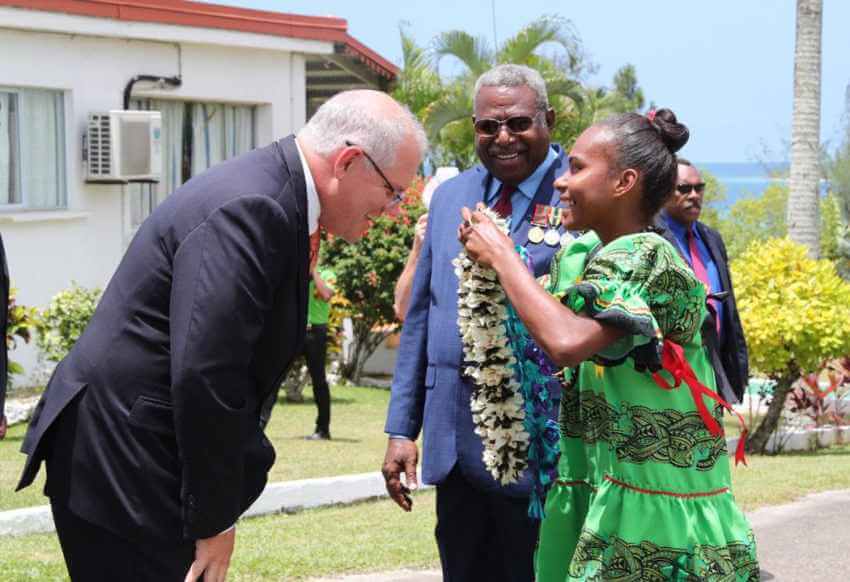 Part of a leader’s magic is to spin a few words into political gold, capturing the moment and proclaiming the future.

Prime Minister Scott Morrison has a long way to go to touch the hem of FDR or Churchill. This former marketing man with a folksy manner hasn’t lit up Australia with his words.

Yet in foreign policy, Morrison has scored—spun silver, I reckon—with his repeated discussion of Australia as part of the South Pacific family. Family is all about folk, so it’s a natural for a folksy PM.

Family offers a story about history and the future that Australians can embrace and the people of Papua New Guinea, the islands (and Timor-Leste) might accept. It’s an explanation of belonging and responsibility—an imagining offering more equality than talk of ‘our patch’ or ‘our backyard’.

Family is a human expression of Australia’s major new offer to the South Pacific—economic and security integration. As an idea, integration is big and difficult policy dressed in neutral, bureaucratic tones.

Canberra hasn’t managed to spin a story about integration that inspires or excites. Nobody is going to mount a great campaign for integration. Family is different: emotion and commitment can be added to the policy ambition.

Morrison began the year by walking the talk (mark that phrase) by visiting Vanuatu and Fiji. It’s striking that this was the first bilateral visit by an Oz prime minister to either country. Australian leaders go to visit the regional kin once a year—if they go at all—for the multilateral summit of the Pacific Islands Forum.

The South Pacific is the one region where Oz foreign ministers still run the game. Given the increasingly presidential nature of our foreign policy, the prime minister has to make the case for family.

On the first leg of the trip, in Vanuatu, Morrison said that if Australia is going to step up, then it’ll have to show up: ‘When a family member or a friend invites you to visit their home, Australians more than often say: “Yes, of course we’ll come,” and who would ever turn down an invitation to visit Vanuatu?’

The real test was in Suva. Since the 2006 coup, the Fiji–Australia relationship has been defined by fights and diplomatic freeze—the roughest of family feuds.

Proclaiming a reset and an open and candid future, Fiji’s Prime Minister Frank Bainimarama embraced the family concept: ‘I am proud to say that Prime Minister Morrison and I have dubbed a new Fiji–Australia Vuvale Partnership aiming to consolidate our two countries’ relations in order to leverage new opportunities and address common challenges. In the Indigenous i-Taukei language, Vuvale means family.’

Vuvale. What a political gift!

In diplomacy, the ownership of good ideas is usually mixed. In the discussions last year preparing for the Fiji visit, vuvale/family became the motif. Whoever offered it first, Morrison has embraced it and made it central.

Now for the hard part. Translating family into Australia’s policy of integration with the South Pacific.

Australia’s declared position, set out in the 2017 foreign policy white paper, is that ‘helping to integrate Pacific countries into the Australian and New Zealand economies and our security institutions is essential to the long-term stability and economic prospects of the Pacific’.

The integration policy is a new ideal: not just neighbors, but joined. It’s a complex task for Australia and New Zealand, an important offer that the South Pacific will embrace slowly. Integration must evolve over decades.

For a cautiously critical assessment of the integration policy, see Tess Newton Cain’s fine paper for the Cairns Institute, Walking the talk: Is Australia’s engagement with the Pacific a ‘step-up’ or a stumble?

Drawing on 20 years of living and working in the islands, mostly in Vanuatu, Dr Newton Cain offers a dry, accurate view of Australia’s history of missteps, ‘leading to squandered opportunities to establish and develop key relationships’.

Australia’s approach, she writes, gives priority to ‘security, security, security’. The tone is all threats, risks and stability. As she notes, Australia has to grapple with the Pacific view that climate change is the ‘single greatest threat’.

Newton Cain questions whether integration is ‘the obvious and most acceptable way forward for future relationships with Pacific island countries’, especially because of island reluctance to cede sovereignty.

I’m far more positive than Tess about integration as part of a long process of building an economic, political and security community. Where I agree completely with her is that Australia best serves itself and the South Pacific by lots of listening and learning.

As she concludes: ‘What is needed for Australia to step up engagement in the Pacific island region is a sure-footed approach that is based on a firm footing of mutual respect and partnership.’

Just what a family is for.