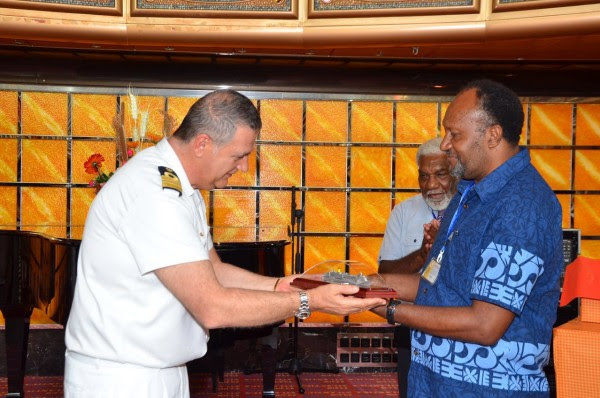 The Costa Atlantica, currently sailing China’s first 46-day cruise to the South Pacific, has become the first large cruise to visit Vanuatu from China as it berthed in Port Villa earlier in the week with over 2,000 Chinese guests onboard.

The VIP Delegation of Vanuatu was later welcomed by Captain Nicolo Alba.

According to a statement from Costa, in line with China’s “One Belt, One Road” initiative, this 46-day cruise launched by Costa Asia in partner with Caissa Touristic is expected to promote cooperation between the countries along the road in travel, business, culture, education and transportation.

The arrival of China’s first South Pacific cruise was special cause for celebration in Vanuatu, welcomed by tropical music and local dance performances to entertain Chinese guests with local traditions. Then Costa Atlantica docked at Port Villa for 10 hours, allowing its guests to explore the culture and nature in the island nation.