Out of interest in history and respect in all things Vanuatu we have  re-posted  this story from the  London  telegraph paper on…….

” How Vanuatu  Independence  came about “

ANDREW STUART, who has died aged 85, oversaw the fraught transfer to independence of the New Hebrides (now Vanuatu) during the so-called ‘Coconut War’ with France; he also had long experience as an African colonial and post-colonial administrator, and was later Britain’s Ambassador to Finland.

The Coconut War erupted when Stuart was forced to quell a rebellion by bow-and-arrow-wielding cargo-cult devotees on the eve of Vanuatu’s independence in July 1980. At his request 200 Royal Marines of 42 Commando were sent to the South Pacific island nation by Margaret Thatcher from their base in Plymouth.

Stuart then ensured that the Marines stayed for three weeks after July 30, independence day, paving the way for a successful peacekeeping operation by troops invited in from Papua New Guinea by Vanuatu’s first independent Prime Minister, Walter Lini.

Stuart and his colleagues believed that, had they not acted as they did, Vanuatu might have remained a colony – in the hands of the French. The French and British had been partners since 1906 in the 74-year-old “condominium”, or dual system of government, that prevailed in the 80 volcanic islands scattered across 500 miles of sea.

As the British Marines set off, French paratroopers were travelling to the same destination from a far closer base, France’s New Caledonia possession only 300 miles to the east. The cargo cult rebellion, led by the bearded, semi-literate Jimmy Stevens on the New Hebrides’ Santo island, caused tension between the two European rivals right up to the moment when the last colonial flag was lowered.

Stevens, a Melanesian “Big Man” and leader of the francophone “Nagriamel” cult, w 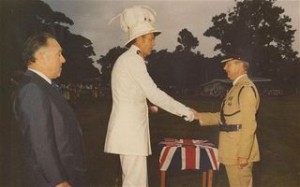 as objecting to the election in 1979 of Father Lini, an Anglican priest, and his English-speaking Vanuaaku Pati party to lead Vanuatu’s first independent government.

In protest, Stevens and his near-naked henchmen occupied Luganville, an old American Second World War base with an airstrip, 20 miles south of Stevens’s settlement of Vanafo, where, with promises of jeeps and refrigerators in return for wives, he had established his “Republic of Vemarana”.

Stuart became convinced that his Gallic counterpart, Inspectorate-General Jean-Jacques Robert, and others egged on by ministers in Paris, were supporting Stevens’s rebellion with the aim of holding on to the colony for France .

Stuart stood 6ft 7in tall (loftier still in his red and white, cockatoo-plumed Governor’s sola topi) and loomed above the dapper Insp-Gen Robert (even in his képi). For two years after their arrival in 1978, the two men had struggled from their separate residencies to remain on good terms despite the differing demands of their masters in London and Paris.

But as independence approached, Stuart repeatedly found that Robert was taking action in day-to-day affairs without informing him. Further violence, and the shooting dead of a French-speaker on Tanna island (where a different cargo cult revered the Duke of Edinburgh), convinced the French that the British had been planning a coup de maître based on the prestige of the British Royal family, to wield continuing influence in the region. A lengthy French memorandum detailing this purported British scheme was found left behind after independence.

As July 30 neared, the French asserted that their newly-arrived paratroopers had so calmed the situation that no British military force was required. But Stuart insisted to London that the Marines, by then in Hawaii, should continue to the New Hebrides’ capital Port Vila. Stuart unilaterally changed the airst 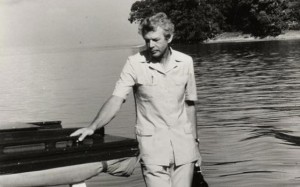 rip regulations to allow the Marines’ extra-heavy VC10 to land.

But the arrival of the Marines at the scene of Stevens’s rebellion was preceded by a secret visit to Stevens by Insp-Gen Robert. The two men had agreed that the British forces — who were expecting to be opposed on landing — would instead be greeted at the airfield by dancing girls with garlands of bougainvillea.

The Marines then came under French command, and were restricted to guarding the only remaining colonial flagpole, while the rebels whooped unchecked. A few Marines nevertheless managed quietly to slip away under cover of darkness to destroy Stevens’s separate Vemarana flagpole and flag by slicing through the metal shaft.

Stuart wrought his final act of diplomacy, and triumph over his French rival, by removing his glasses when faced with a letter from Father Lini (also sent to Robert) which ordered the expulsion of both French and British forces. Stuart was thus able, while apparently still ignorant of the letter’s contents, later to offer the transitional services of the Marines to the new state, which Lini accepted.

Andrew Christopher Stuart was born at Ludlow, Shropshire, on November 30 1928, the son of the Rt Rev Cyril Edgar Stuart, Anglican Bishop of Uganda, and his wife Mary Summerhayes. He was educated at Bryanston School in Dorset before reading Law at Clare College, Cambridge. After National Service in the Royal Navy he joined the Colonial Administrative Service in Uganda in 1953, staying on for a further three years after independence in 1962.

He was awarded the Colonial Police Medal in 1961 for obtaining the arrest of a spear-wielding, self-styled “prophet”, Kigaanira, by climbing up a hazardous rock while distracting the troublemaker with the polite reciprocal greetings of the local language, Luganda.

After being called to the Bar by Middle Temple in 1965, Stuart joined the Diplomatic Service, and was posted as First Secretary and Head of Chancery in Helsinki, Finland, until 1968. He joined the Asian Department, and by 1972 was head of the Hong Kong and Indian Ocean Department, before serving as counsellor in Jakarta, Indonesia, until 1978. He was appointed CMG in 1979.

After leaving the New Hebrides, Stuart served as Ambassador to Finland until 1983 . He retired from the Diplomatic Service that year and until 1990 was Principal of the United World College of the Atlantic in Wales. His book Of Cargoes, Colonies and Kings was published in 2001. 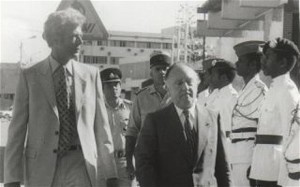 In 2004 Stuart was one of the 52 distinguished diplomats who signed a letter composed by the then ambassador to Libya, Oliver Miles, deploring the Middle Eastern policy making of the Prime Minister, Tony Blair.

Stuart married first, in 1959, Patricia Kelly, whom he had met in Uganda and with whom he had two sons and a daughter. She died in 2008, and he met his second wife, Susan Lines (née Houghton-Brown), while giving lectures on a cruise ship. They married in 2010, and visited his old haunts in Vanuatu and in Uganda, where in 2012 they attended the 50th anniversary celebrations of independence.

Andrew Stuart is survived by his wife, and by the three children of his first marriage.