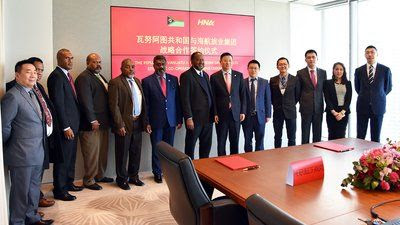 WeChat mini-programs are growing in popularity and are becoming an established part of the WeChat ecosystem. In travel, a growing number of destinations have launched WeChat’s so-called CityExperience mini-program guides, with other travel businesses launching increasingly sophisticated purpose-built mini-programs. Have you?

HONG KONG, Feb. 28, 2017 /PRNewswire. — A ceremony to mark the signing of a Strategic Cooperation Agreement between HNA Tourism Group Co., LTD (HNA Tourism) and the Republic of Vanuatu took place on 28th February in Hong Kong. Prime Minister of the Republic of Vanuatu, Hon. Charlot Salwai, and the Director of Hainan Airlines Group Board of Directors, Hainan Airlines Travel Industry Chairman and Chief Executive Officer Xin Di, on behalf of the two sides, signed the Strategic Agreement, announcing that they will commit to opening up cooperation on issues related to tourism and aviation resources.

Vanuatu is located in the western South Pacific, adjacent to Australia and New Zealand. It is known as the “back garden” of Australia and New Zealand. Vanuatu has 83 separate islands and natural white sandy beaches. The waters near the island are safe and the lagoon is unique in color. Furthermore, the different areas in the country have retained the customs and traditions of the aboriginal populations. The country also has a rich cuisine, alongside attractive performances to offer.

Vanuatu has been recommended by the world’s leading English travel magazine, Lonely Planet, as one of their top ten tourism destinations. It has also been repeatedly rated as the world’s happiest country with natural and cultural tourism resources, which all together form a great potential for development.

Prime Minister of Vanuatu, Hon. Charlot Salwai, expressed the following at the signing ceremony: “In recent years, the number of Chinese tourists to Vanuatu has risen year after year; the annual growth rate has maintained at 4%. In 2016, there were thousands of Chinese tourists who visited Vanuatu either by plane or cruise. Through cooperation with HNA Tourism we hope to further develop the tourism resources of Vanuatu and improve the infrastructure to provide a more comfortable tourism experience for Chinese tourists. The year 2017 marks the 35th anniversary of the establishment of diplomatic relations between Vanuatu and China and we also hope that we can, through this initiative, further deepen the Vanuatu-China friendship.”

The Director of HNA Group Board of Directors and HNA Tourism Chairman and Chief Executive Officer, Mr. Xin Di, expressed the following: “Vanuatu is a holiday paradise in the South Pacific; it is also a crucial south node for the ’21st Century Maritime Silk Road.’ As a subsidiary of HNA Group’s largest air travel industry unit, HNA Tourism will use its aviation, hotels, travel agencies, entertainment and other cultural resources to promote the development and upgrading of the tourism industry in Vanuatu. In addition, this will provide Chinese travellers with more options for outbound destinations.”

Such cooperation will foster communication and consultation for the opening up of new airline routes. HNA Tourism will push forward its subsidiary outbound listed travel company, Caissa, to carry out active cooperation in areas such as product development, infrastructure transformation, route operations, hotel operations and the promotion of Vanuatu as an outbound travel destination.