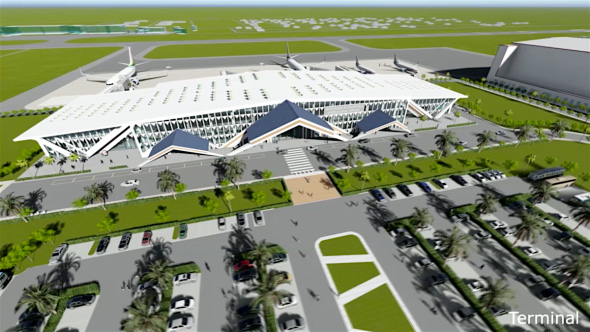 An architectural rendering of the proposed new terminal building for Bauerfield International Airport.

The Bauerfield runway upgrades go to CCECC: it’s official. There had been disagreements between the World Bank and Government, but the World Bank is happy the processes have now followed the appropriate procurement procedures. It adds “the good news now is that all bidders have been formally notified of the completion of the evaluation process, with contract negotiations to be scheduled by the government in thew coming days.” CCECC is well-known in Vanuatu for a number of big projects, from roads to the new Korman sports facilities being constructed for the Mini Games. (Daily Post)

The Bauerfield runway repair delay is holding up the codesharing agreement with Qantas, it seems. Air the codesharing between Brisbane and Luganville continues to function, but not between the Queensland and Vanuatu capitals. Further talks will happen soon. However, we had had some very good news for our regional routes with the likely opening up soon of Nouméa–Santo and Nouméa–Tanna. The latter will be welcomed by all Tafeans as we have had an ‘international’ airport there for 18 years now.