Vanuatu became a member of the World Trade Organisation (WTO) back in 2012, and has made immense economic progress. On 4 December 2020, Vanuatu is scheduled to graduate from least developed country (LDC) status.

The country’s GDP growth rate has been hovering at 3-4% over the past three years (between 2 and 3% is considered strong), per capita income has doubled since 1990, and foreign investment has flourished under an open, transparent and conducive policy environment.

What’s more impressive is that the country has done so amidst inherent economic difficulties.

“Remoteness means higher transport costs for both imports and exports. Coupled with Vanuatu’s small domestic market, this makes it quite difficult for the country to integrate into global value chains,” said Arne Klau, a WTO fellow who co-authored Vanuatu’s 2018 Trade Policy Review – a transparency exercise mandated by the WTO that occurs approximately every seven years for member countries such as Vanuatu.

These achievements are testament to a change in mindset of the government, said Eliu Luen, Manager of the Vanuatu office of the Enhanced Integrated Framework, which works with LDCs to spur trade and economic development.

“Vanuatu has taken an inclusive approach to policy and decision making – inviting civil society organisations and the private sector to get involved. Once such implementers were involved, it became a more effective process,” he said.

An example of this is the National Trade Development Committee – a high-level group of public and private sector representatives that debate trade development problems and make recommendations to the Vanuatu Council of Ministers.

“It’s essentially a trade parliament. It has been very effective,” Luen said. 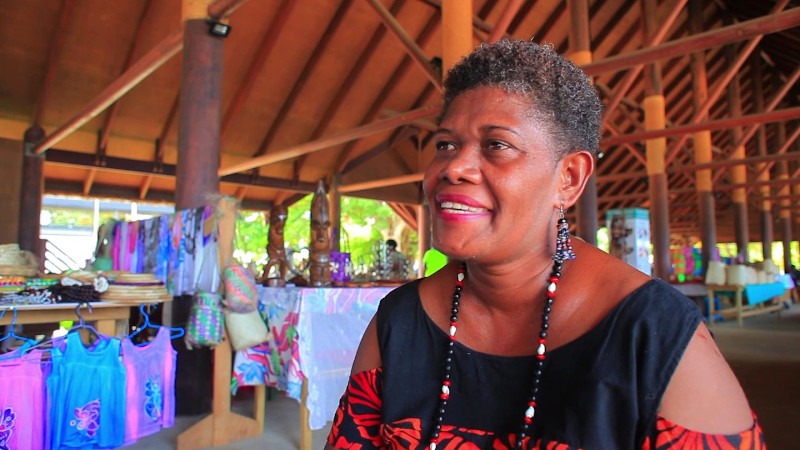 State stability enabled the country to leverage a tourist boom, even despite a devastating blow by Cyclone Pam in March 2015.

“Vanuatu turned a disaster into an opportunity to redevelop their seafront. With support from various donor country governments, the whole view of the seafront has now changed. It is a buzzing business hub of cafes, restaurants and handicrafts. Everyone is benefitting from it,” Luen said.

Market mama Rosalie Vatu has gone from a single business owner to the head of an association.

“When Cyclone Pam came, it was a disaster, it was really sad for us… As the development of beautification and Haus Blong Handikraft especially has been built, it was a really great development for us,” she said.

“It’s a unique thing, our centre at Port Vila, the tourists come in and can only see Vanuatu-made here. It’s a big opportunity for us,” she added.

Its economic achievements means that Vanuatu has met the criteria necessary to graduate from LDC status in 2020. While this is a major milestone, there can often be fear due to change in international aid eligibility.

“There is nothing to fear,” Luen said of this.

“Vanuatu has also brokered bilateral agreements based on climate change aid rather than aid for being an LDC. And, the Enhanced Integrated Framework will be supporting Vanuatu for another five years to transition to a post-graduation life.”

Guided by an ambitious National Sustainable Development Plan (called “the People’s Plan”), Vanuatu has clear goals for the next phase of its development.

“There are currently efforts being put into implementing a free trade economic zone, decreasing time for traders to export using a single window system, and building a wharf and plant for fish manufacturing,” Luen said.