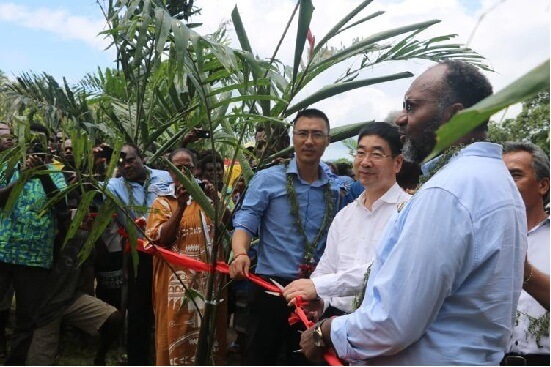 The handing over of the Malekula Road project on Saturday, March 2 completes Phase I of the roadworks on Malekula.

China Civil Engineering Construction Corporation (CCECC) South Pacific Limited Managing Director, Liang Qing, who is also the Deputy Director in the Department of Foreign Aid said Phase I of the project on both Tanna and Malekula is now complete.

The handing over also coincides with the launching of the Malekula Phase II works under the Vanuatu Road Rehabilitation and Reconstruction project.

”Now, Phase II of the project on both islands will soon get underway and Phase II Malekula project will be our biggest project,” he said. “We look forward to working with the people of Malekula, specifically those people whose livelihood will be affected during the construction stage of the project.

Mr Liang said since CCECC started work on Malekula in 2015, they have engaged with the local communities in sponsoring sporting events, community financial assistance and other financial support in areas.

”We look forward to the commencement of the next phase of the project and in working with the local communities and people and will continue to ensure that we uphold the same standard and work ethics displayed during the construction of Phase I,” he said.

The Chinese Ambassador to Vanuatu, Haicheng Zhou commended the Prime Minister Charlot Salwai and the current government for the solidarity to ensuring positive development for the people of Vanuatu.

”I believe the Malekula Road Phase II will be another landmark project in the history of our bilateral relations,” he said.

”This road will definitely provide easy access to the prosperity and happiness of the local people.”

Prime Minister Charlot Salwai acknowledged CCECC and the government of China for the bilateral relationship that has resulted in many developments in the country.

”The road infrastructure in Tanna and Malekula is a testament to the world that our strategic partnership and development cooperation is strategically targeted to alleviate poverty and uplift the standard of living for our 80% of the population who live in remote and rural areas of Vanuatu,” he said.