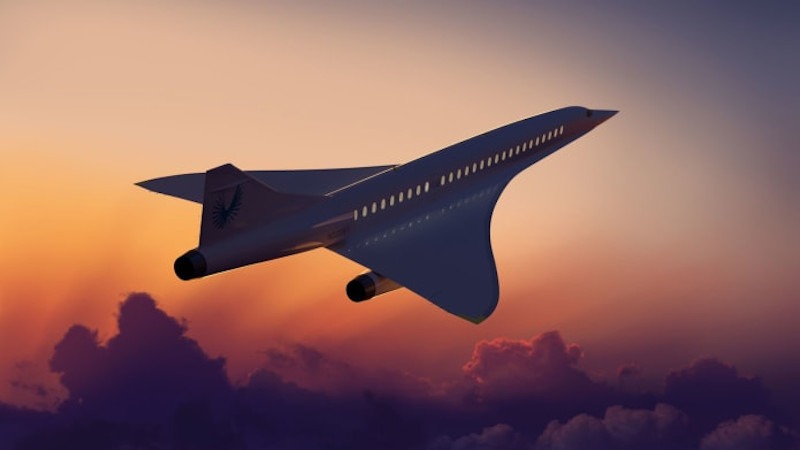 The British-French airliner Concorde, one of only two supersonic jets to have operated commercially, flew from 1969 to 2003 and was ludicrously expensive and an environmental disaster.

But now a fresh bunch of start-ups are working on supersonic and hypersonic projects. Last October frontrunner Boom Supersonic was the first to roll out an actual honest-to-goodness IRL demonstrator aircraft, the XB1.

CNN Travel caught up with its founder and CEO Blake Scholl to talk about Overture, the Mach 2.2 commercial airliner he wants to get in the air by 2026, and the company’s ambitious long-term plans.

“Either we fail or we change the world,” says Scholl over a video call from Denver, Colorado. There hasn’t been any major speed-up in travel times since the Jet Age of the ’50s and ’60s and his team hopes to change that. 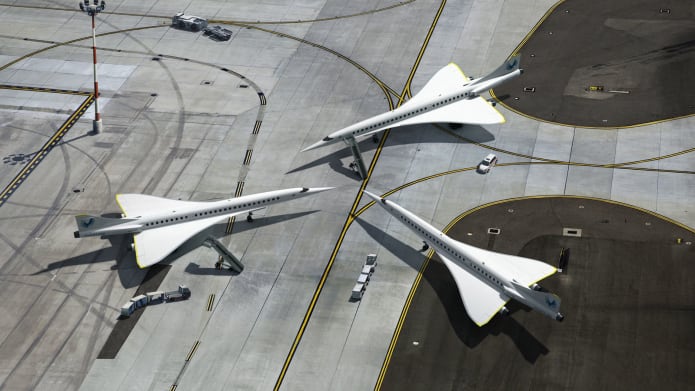 “That barrier of time is what keeps us apart. We believe it’s deeply important to break the time barrier, more so than the sound barrier.”

Designed to seat between 65 and 88 people, Overture will focus on over 500 primarily transoceanic routes that will benefit from the aircraft’s Mach-2.2 speeds — more than twice as fast as today’s subsonic commercial jets.

A journey from New York to London would take just three hours and 15 minutes while Los Angeles to Sydney would be cut down to eight and a half hours.

Set the goal, then work backwards

Boom Supersonics current timeline is to fly the 1:3 scale XB1 prototype aircraft “around the end of the year,” break ground on a new US factory in 2022 (location TBD), and then start building the first Overture plane in 2023. 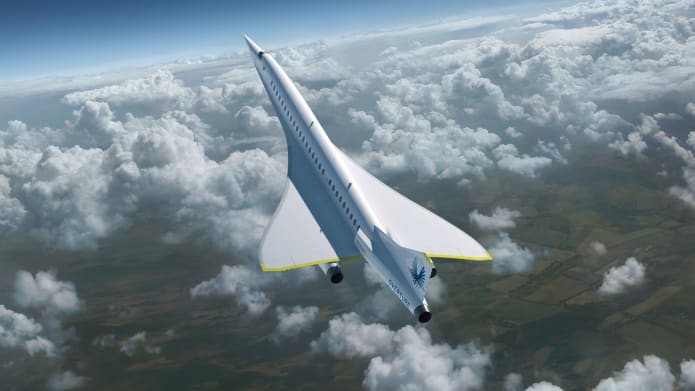 “We see ourselves as picking up where Concorde left off, and fixing the most important things which are economic and environmental sustainability,” says Scholl.

Accessibility is key. His aim is that airlines will be able to set fares at a price point similar to business class — unlike Concorde, which by the ‘90s was charging around $12,000 for a round trip, or $20,000 in today’s money.

“That’s not travel, that’s like a thing you might hope to do once in a lifetime,” says Scholl, before adding, “Versus where we want to get, which is anywhere in the world in four hours for 100 bucks.”

Yes, you heard that right”

Now it’s going to take us time to get there,” says Scholl. The four hour, $100 dream is Boom’s long-term aim, two or three generations of aircraft down the line.

“Lots of people think like one or two steps ahead,” he says. “I find it helpful to think much further out and say, ‘where do we want to be in a decade or two? And what’s possible at that time scale?’ Then you work backwards and say, ‘how do we get there?’.”

How Boom plans to get there is by designing a new 100% carbon-neutral plane from the ground up. The current crazy state of the world has actually been an unintended bonus. 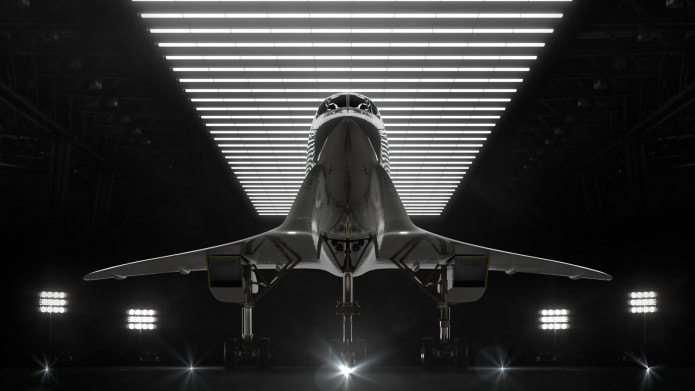 “I wouldn’t wish the pandemic on the world, but it’s actually going to accelerate the adoption of supersonic,” says Scholl.
Airlines have had to downsize their fleets and, in some cases, it’s forced an early retirement for wide-body jets such as the Boeing 777 and Airbus A380.

“As things get back into growth mode,” says Scholl, “There’s an opportunity to build a new-generation fleet that’s got supersonic baked into it. That actually makes it easier to adopt.”

Then there’s the plane’s lean 199 feet (60 meters) of super-svelte lines, with no space inside for those undesirable middle seats — an advantage post-pandemic.

“Physics does not let you design an ugly supersonic jet,” says Scholl. But whizzy as its exterior may be, “It’s about the same form factor as a 757, so it fits in narrow-body gates, which actually causes airlines to really love it.” 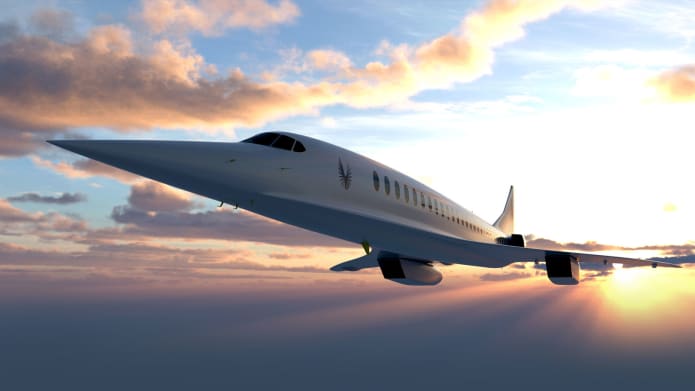 Wide-body gates are at a premium in today’s super-congested airports, so big fat airplanes can be hard to find space for — but not so for a humble Boeing 757, 737 or, says, Scholl, a Boom Overture..

“Supersonic’s got some inherent advantages,” says Scholl. “Like if you don’t want to be in an airplane because you’re worried about the next pandemic, well it’s better to be on the airplane for a shorter period of time.”
Boom’s first mission, he says, was to be fast enough to make a difference. While ultimately his team wants to be able to connect any point in the world in four hours, at this stage a key aim was to be able to turn a red-eye flight into a daytime flight.
“Instead of paying in business class for a flying bed, you get the best bed in the world, which is the one at your home the night before you have to leave,” says Scholl. 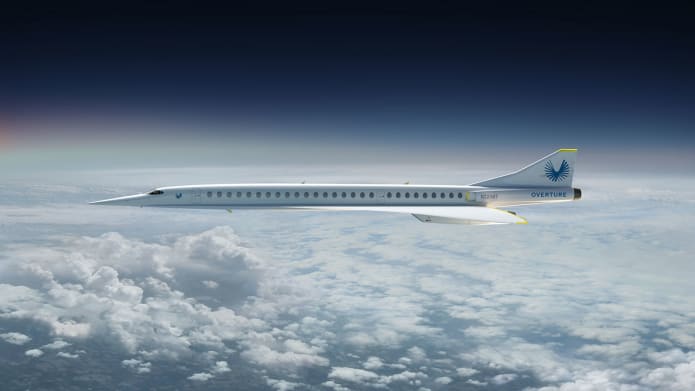 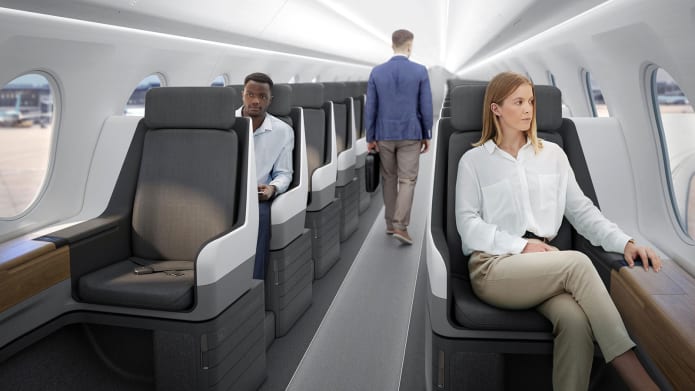 With less focus on those long-haul amenities, it means the team has been able to focus on making the on-board experience clean, uncluttered and as relaxed as possible.

For many it’s hard to shake the idea that supersonic travel must be inherently expensive and wasteful. But says Scholl: “It helps to remember that we’re talking literally about 1960s technology. So much has changed.”
Airplane technology has “gone from aluminum to carbon fiber, from drafting paper and slide rules and wind tunnels to being able to optimize airplanes for computer simulation. We’ve completely changed how we build jet engines, so now they’re quieter and they’re more fuel efficient.”
This means that the costs of supersonic flight has come way down, and at the same time, we are now able to build in support for alternative fuels. 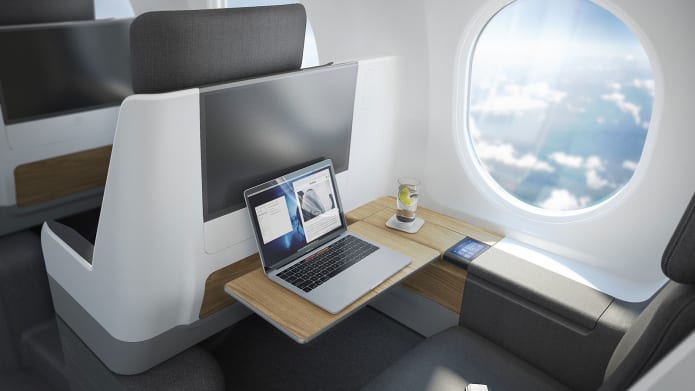 “What you’re basically doing is sucking carbon out of the atmosphere, liquefying it into the jet fuel, then you put that in the airplane,” says Scholl. “So when it goes out the back of the airplane. You’re just moving carbon around in a circle.”

So how realistic is Boom Supersonic’s long-term ambition of connecting anywhere in the world in four hours, at a price point of just $100 in today’s money?
“It’s an audacious goal!” says Professor Sean O’Keefe, an aviation industry expert at Syracuse University who served as former chairman of Airbus and secretary of the US Navy. “And sometimes that’s what it takes: to get somebody who really believes in their capacity to do something like this, to actually make it come to be.”
The major obstacle is that “beyond just accomplishing the speed, it generates a ferocious amount of heat. Any conventional engine that you put together would melt.” What will be needed is further advances in material science — and it’s dependent on further invention or discovery. 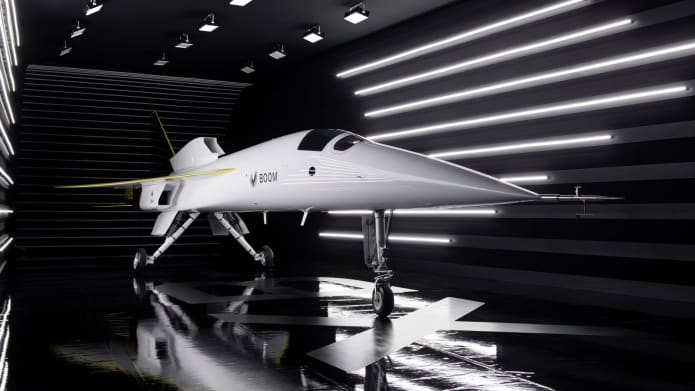 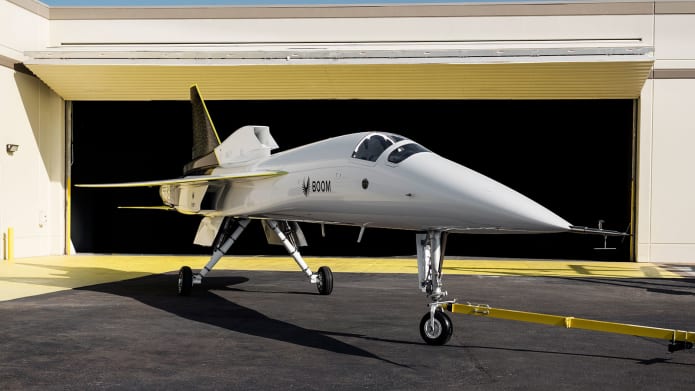 While it’s feasible, O’Keefe reckons “it’s going to require two or three generations of technology, development and breakthrough — which equates to about 20 years.”
Interest in Boom’s project has been high. A couple of weeks ago, Scholl addressed the US House of Representatives’ Subcommittee on Aviation and in April American Express Ventures was the latest high-profile investor to open its wallet. Boom says it currently has $6 billion in pre-orders of Overture aircraft.
Boom’s hottest competitor in the supersonic race is Florida-based Aerion, which in March 2021 unveiled its plans for a Mach 4+ commercial airliner called Aerion AS3 which would be capable of carrying 50 passengers.