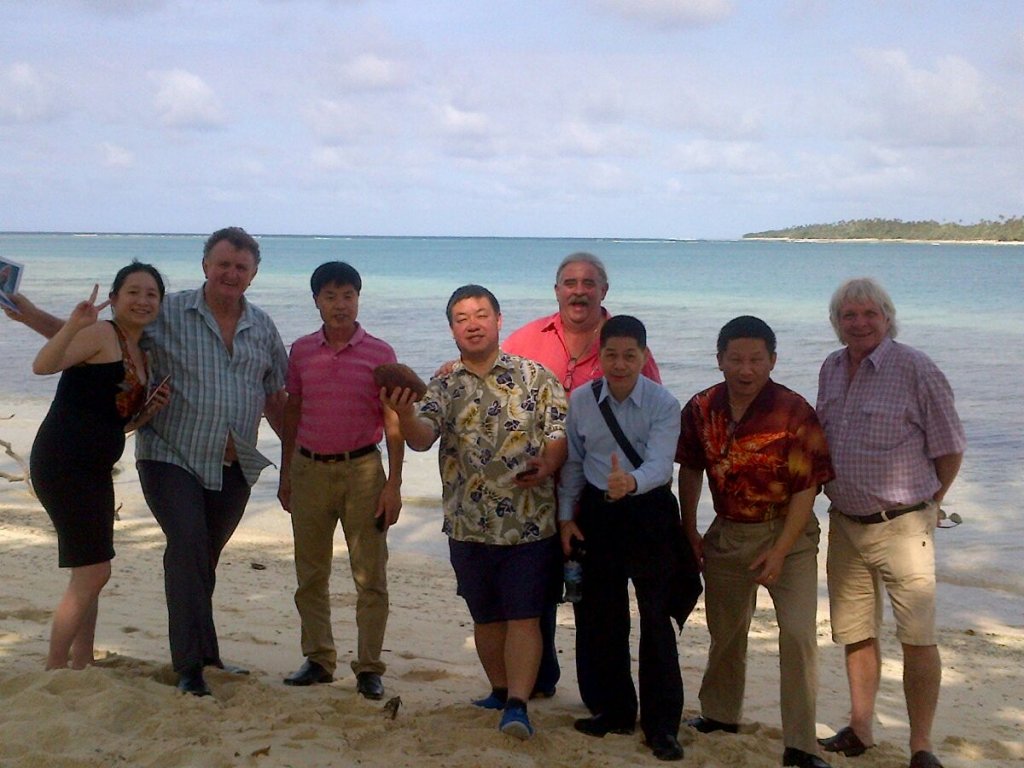 Richard Butler with mostly Chinese investors on a Vanuatu beach

The survey of 120 mainland Chinese real estate agent’s that were given the questionnaire was complied from agents whom collectively sold over 10,000 foreign properties in 2016/17 worth more than an amazing $5.27 billion dollars

The takeaway from this international review of Chinese outbound investment is featured spotlights and sections such as the Australian, US and UK market the report covers the sentiment of Chinese buyers and current anticipated demand for 2017/18

There were 10 key points

Chinese expected yields between 5 to 7% are attractive to investors although not important to all some are motivated by buying in a school University zone, migration and a second home or as a investment for currency head basically all basically a PLAN B

In Australia, Melbourne, Sydney and Brisbane account for 90% of all off- the- plan purchases with the Gold Coast, Adelaide and Perth representing much smaller markets.

Chinese like apartments still the top choice at 64%, followed by single homes house and land packages 55%, townhouses 38 % and land 33%

82% of Chinese have enough funds to complete their property purchases and potentially do not require loans.

For those who do require funding 43 % agents stated this will affect their clients buying decisions,

47% said children’s education is the top and centre for overseas investment,

69% and said safety and capital gains

6
Chinese property investors have a strict selection criteria when purchasing. Budget 64%, followed by location 63% and then investment return 58%

At the present these agents reported that Australia holds the number one position for Chinese investors with the USA as the runner up is expected to take over Australia in 2017/2018. Many other countries are now setting up to take advantage of the Chinese interested in investing overseas.

Of all the agents polled, 88% predicted sales volumes of properties will increase or remain unchanged in 2017/2018, 70% predicted an increase, 18% expected the same demand and only 12% predicted a decrease in volume.

Why are they buying what is there main drivers children’s education 91%, migration 83%, asset protection and capital gains 82%, lifestyle 39% and other 20%.

Overseas purchase drivers most important to the investors

Countries that provide golden visa’s and passport and citizenship for migration were 52% of overall reasons.

As you may or may not know I have a great interest in selling worldwide the opportunity of investing in Republic of Vanuatu as prices in Sydney and Melbourne have increased to almost non-affordable for a very high percentage of the first home buyers and also for investors who are now looking elsewhere for price point entry and high ROI opportunities.

There is a lot of interest now at what is called the Ripple effect witch affects markets in the close by areas and further a field states of Australia its a simple effect prices of real estate lift to a perceived high those who have made a bundle decided to offload and move to a warmer climate with a lower buy-in price and bank the difference .

I started selling Queensland real estate to investors in Sydney back in 1980 when they then thought paying $100,000 for a inner city suburb like surrey hills and Paddington (100 year old townhouse’s) was too expensive (Now $2 million). At that time you could buy a house in Brisbane for $6,000 to $12,000 in a reasonable area close to the city within 3 to 5 kms from the CBD, now $1 million and above

Although Brisbane and Queensland will attract many buyers in the near future from this ripple effect it is also time now to reach out to the South Pacific islands as an alternative. Somewhere that serious property investors are now considering.

You should start to consider investing across borders as the Asian investors are. The main international airport in Vanuatu’s capital Port Vila is being upgraded to accept direct flights from Asia and will be able to accommodate the Boeing 787 Dreamliner carrying up to 320 tourist’s, rather than the Air Vanuatu or Virgin Airlines 737-800 that only carries up to 150 passengers. The Vanuatu estimated increase in tourism over the next 3 to 5 years is simply amazing .

If you visit our website www.Vanuatuinvest.com you can enter your details and have my 10 secret reasons why Vanuatu at the moment is attractive for both capital appreciation and as a plan b for long term security and a currency hedge, and finally if lifestyle is high on your property investment radar not to mention the 10 year lease back with 7.5% guaranteed rentals so visit the site or you can reach out to me at Richardbutlersales@gmail.com or mobile phone number with country code +61 417007792 local Australia 0417007792

WHO IS THE WRITER ?
Richard Butler has been a property developer since 1980 has been involved in the Republic of Vanuatu Real Estates and 2008 was appointed trade Commissioner for the Republic of Vanuatu 2012 2015 A3 year 10 and has recently been reappointed April 2017 for a further 2 year term to encourage economic and Commerce investment into the Republican Vanuatu in large residential and resort development organic agriculture forestry and marine developments